"Zoey unfolded into an everyday young woman who everyone can relate to."
―Andrea Wicklund, Valve.
"No one left behind, right?"
―Zoey

Zoey is one of the four playable Survivors in Left 4 Dead. Her original design was based on Alesia Glidewell, who also worked with Valve on Portal as a model for the character Chell. However, when the character designs were updated later in development, Zoey was made to resemble actress/model Sonja Kinski instead. In official media, she is usually seen wielding dual Pistols.

Zoey, along with Louis and Francis, returns as a non-playable character in Left 4 Dead 2. Unlike her perky attitude in the first game, she comes off as somewhat more serious and, at times, angry. This is probably due to the events that transpired in The Sacrifice.

Zoey was once a student at Aldrich in Philadelphia under a scholarship to become a filmmaker but instead of attending classes, she spent her time watching horror films and justified this to her upset mother as doing some "research". She got her love for this film genre from her father who introduced her to movies featuring zombies, slasher murderers and extraterrestrials at a young age. Her father, Wade, wished for her to become a police officer like himself, often taking her to shooting ranges to get her into some practice. These actions caused tension between her divorced parents one night and started a heated argument between the two regarding their daughter's future.

The argument was short lived however when an Infected suddenly found his way into their living room and attacked Zoey's mother, Carolyn. Her father was able to kill the Infected but not before it savaged Zoey's mother. Holding Carolyn in his arms, Wade commanded Zoey to call for an ambulance. Zoey came back to witness her father being mauled by her mother, who then noticed her daughter's presence and quickly lunged at her. Fortunately before she could reach Zoey, Wade shot her in the back of the head. His last request was for Zoey to kill him before he became an Infected. She then reached for her father's gun and after a heart breaking "I love you dad", she pulled the trigger. Weeks later, Zoey was shocked to discover that her father may have been a Carrier and the mercy-killing could have been in vain.

Overall, Zoey is perhaps treated the kindest by the other Survivors. 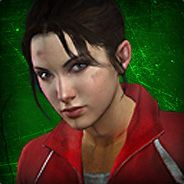 Zoey's other death animation of her lying on her side. Note the Defibrillator marker around her.

Zoey as she appears in-comic.

Zoey outside the Riverside Church.
Add a photo to this gallery

Retrieved from "https://left4dead.fandom.com/wiki/Zoey?oldid=158209"
Community content is available under CC-BY-SA unless otherwise noted.