"I want that truck."
―Zoey
"Hey Zoey, when I drive us outta here, don't shoot me alright?"
―Francis

For the actual in-game truck depot, see The Truck Depot.

The Truck Depot Finale is the second and last level in Crash Course.

This chapter takes the Survivors to a truck workshop where an armored bus (the Survivors refer to it as a truck) sits atop a raised service hoist in a vehicle depot workshop.

In what looks to be homage to the vehicle used in the Dawn of the Dead movie remake, the vehicle's modifications include scrap metal armor-plating and suitable zombie-proof barbed wire and a small bulldozer-type blade to resist attacks and break through the Infected's ranks.

Players must activate a generator to lower the hoist and so that they can enter and drive off through an attacking horde.

The finale poses three simultaneous combat challenges. Firstly, the hoist drops very slowly; secondly, the generator stalls and must be restarted; and thirdly, this is a Crescendo Event featuring waves of Infected (Common and Special) and two Tanks. This finale is difficult for the Survivors because the Infected can attack at close range and from virtually every direction.

Safe rooms are sparse in this town, better get out while you still can! Various graffiti mentions a truck at the depot, make your way there!

The Survivors think they can blow up a bridge and not face the consequences? The whole county is on them now, work with those mindless Common Infected to cover their van in their own blood.

As Left 4 Dead is a co-operative game, the players should apply most (if all of them are not possible) of the strategies noted below to ensure their survival. Not applying any of these may likely result in death and eventually a failure.

The Survivors start in a safe room with all the weapons and equipment from the previous chapter (or a Pistol if started directly from the lobby). The A.I. Survivors will pick up the weapons from the safe room tables:

When leaving the safe room, it is a good idea to grab the Hunting Rifle to kill any wandering Infected that spawn outside before switching back to your preferred weapon to make the first area safe to explore as it is wide with a lot of obstructions.

At the outside of the warehouse, there is a shortcut which Survivors can use to skip a section of the map. This requires jumping on an alarmed car stuck in between the fence and delivery truck by a Humvee. This route takes players over a barbed wire fence to the top of the truck on the other side. This shortcut will take the Survivors to the metal supply plant loading docks. This method is risky because the car alarm will alert a horde. However, it is possible to jump on the truck and avoid setting off the car alarm, but this is rather tricky and requires jumping at the right spot to avoid failing in the jump or landing on the alarmed car.

It is better to not restart the generator until the second Tank is dead. There should be enough time to restart it before the next horde.

The map only has one significant change, the removal of a shortcut by the alarmed car, as detailed above. When first added to L4D2, the large cargo containers on the finale had a slight cosmetic difference - more vibrant and varied colouring was applied over the top of the original textures. This colouring has been removed and the cargo containers now look identical to how they did in the original game as of The Last Stand Community Update. It is notable that, as this campaign was released during Left 4 Dead 2's development, it already had several of Left 4 Dead 2's randomised map elements even on the Left 4 Dead version, such as the alarmed cars and open side rooms being different each play.

The Survivors arrive at the Truck Depot and they activate the generator, but the lift is stuck and the truck that they were hoping to use is now unavailable. The noise of the generator is bringing a lot of Infected onto them, how long can the Survivors last?

Just past the safe house.

Near the train bridge.

Just past the bridge.

Getting near the finale.

The truck that leads to the finale. 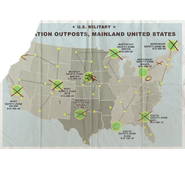