"Oh great, now they're spitting shit at us!"
―Ellis
"So that's a Spitter, huh? Do you think she's single?"
―Nick

The Spitter is a Special Infected that made her debut in Left 4 Dead 2.[1] Her mutations enable her to spit out a ball of mutated stomach acid which, upon hitting the ground, spreads out into a large pool. Any Survivors standing within the pool of acid take increasing amounts of damage based on how long the acid has been down; this can be up to 76 health with a single spit.

Overall, the Spitter's acid does the most total damage of any playable Infected, but is also the least reliable, as it only lasts for a short time, and once it pools out, it is stationary and relatively easy to escape.

When killed, the Spitter leaves a smaller pool of acid around her corpse. She can sometimes be a bit difficult to hear, making faint squealing noises as opposed to the more distinct noises other Special Infected make, but the hacking noises she makes when she actually spits are relatively easy to hear. After the Spitter spits, it takes 20 seconds for her to be able to spit again.

The Spitter is voiced by Dee Bradley Baker.[2]

She is clothed in a gold lamé bra with dark stains, torn dark indigo capris and, perhaps humorously, as well as disturbingly, a pink thong. She also wears a number of rings on her fingers, including a wedding ring, hinting that she was possibly married before becoming Infected. Her hair is chestnut brown and kept in low pigtails, and depending on her model in the CGI movies or in-game, may have green or brown eyes.

It can also be noted that the Spitter's skin glows a luminous green when alive, yet when killed, her skin becomes a normal pink color. This could be due to all the acid being spontaneously released from her body upon death. Moreover, her acid glows in the dark.

Through mutation of the Infection, the Spitter has developed the ability to project an extremely corrosive ball of acid from her mouth in a mortar-like fashion. This projectile will collide with a ceiling or wall and drop down to the nearest solid walkable surface, and upon contact will spread into a large puddle of acid that increases in damage over time. It's possible, from the way the acid is spat, that the Spitter encases it in a thin sort of membrane or bolus (likely in her body or throat/mouth) which is either dissolved by the acid or breaks on impact.
It is evident that the Infection has caused the Spitter to suffer from mega esophagus, or her stomach has eroded all organs found in her neck. This could be the cause of her hacking and gurgling, as acid could be in her lungs. From how heavily the Spitter secretes the acid, it seems that she cannot stop producing at will, and must excrete it from her body in such fashion (as salivating it) to prevent herself filling up and rupturing with acid, similar to the Boomer.

The Spitter's lower jaw, cheeks, nose and lips seem to have become noticeably eroded, suggesting she may not be entirely resistant to the acid she is coughing up. It appears that all around her mouth, the skin has disappeared. Also, just above her breast and on the top of her stomach are two red sores, most likely eroded spots from where the acid drips down from her mouth. Her proportions are awkward and stretched, including the sagging breasts, elongated neck, and bloated stomach, which are most likely used to accommodate and produce the fluids. Her elongated neck may also give her the advantage of being able to spit acid at long distances and high velocity. Her baggy skin and stumbling gait could be caused by the virus or even the acid itself eating away at her connective tissues. The big toe on her right foot has shifted to the side of the foot like the thumb of a hand. While running, a trail of acid can be seen dripping from the Spitter's mouth. This can be used to track the Spitter, although it disappears shortly after she walks away from it. The Spitter's fingernails are very long but not particularly sharp, doing about 4 damage per hit.

Interestingly, as seen in the dark, her acid glows. This is useful for the Survivors to quickly spot her before the Spitter can attack.

The Spitter doesn't need to be close to the Survivors to inflict damage, making her very useful for long-ranged purposes.

As seen in the concept art, the Spitter's pigtails originally were not tucked behind her head, but stuck out like antennas.

The Spitter also had a large, rounded stomach to give her a logical place to brew her acidic goo. However, during playtesting, it became apparent that many playtesters thought she was pregnant or called her pregnancy-themed names. Valve decided that this was rocky territory and made her stomach flatter to avoid any confusion.

She also had a comical pigeon-toed bird walk, changed for being more humorous than frightening. In addition, the Spitter's primary attack was going to behave in a manner similar to the Boomer's bile attack in which the acid would stick to the Survivor that it came in contact with. This concept, however, was scrapped since it made it too easy for Spitters to incapacitate Survivors.

In earlier versions of the game, the Spitter ran much faster and did not release any acid from her body when she died. She also had an acid-like mist that would float for a few seconds in mid-air after she spat at the Survivors; this was the older version of tracking the Spitter before the glowing drool.

Spitter concept art #2. Note how it resembles the female boomer in a way

Final art of the Spitter. 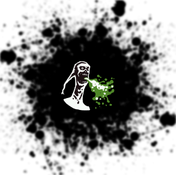 A close-up photo of the Spitter. 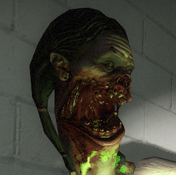 The Spitter's view in Versus.

A Spitter in the Zombie Survival Guide Trailer.