Left 4 Dead Wiki
Register
Don't have an account?
Sign In
Advertisement
in: The Infected, The Smoker, Special Infected
English

Wrap up and drag Survivors from a distance with its long tongue.

Squeezing with tongue, clawing, emitting a cloud of smoke when killed.

"Smoker. He's gonna have to use that tongue to choke my foot out of his ass."
―Francis
"Hey! Where'm I gettin' dragged off to?!"
―Coach

The Smoker is a Special Infected characterized by his extremely long tongue. The Smoker's tongue can be launched out of his mouth at high speeds towards a Survivor, and when it reaches one of them, it automatically wraps around the target's body and drags them back towards the Smoker, where he begins clawing them. If an obstacle is in the way, then the tongue tightens and begins to choke the target.

The Smoker is voiced by Mike Patton.

The Smoker has been heavily mutated by a strain of the Infection and frequently makes high-pitched rasping and coughing noises that can alert Survivors of its presence. Though he resembles most Common Infected, he is taller, more durable, and his skin has become covered in growths that cause little spurts of green smoke and blood to ooze out when shot. It is said that the smoke he expels gives off a putrid smell, but it is otherwise harmless. The left side of his face is bloated and appears to be covered by a large tumor.

In Left 4 Dead, the Smoker can be seen wearing a white shirt with a green jacket along with jeans and Converse-like sneakers. Though his mentality is similar to that of the typical Infected, he is not distracted by things such as the flashing lights of Pipe bombs, nor is he attracted by car alarms going off.

When constricted, Survivors have a brief moment (1-2 seconds) to shoot the offending Smoker before their arms are ensnared by the tongue. If they fail, the Survivor is helplessly dragged off, and will take damage until they die. Survivors can be rescued by killing/shoving the Smoker, or by attacking and breaking the tongue. The Smoker's tongue will slowly grow back after being cut off and can be used to attack again after 30 seconds.

If there is an object (e.g. a car) preventing the Survivor from being dragged, then the Smoker will cease dragging the Survivor and strangle them where they are, dealing the same damage despite being unable to claw them additionally. However, if a Survivor isn't dragged all the way back to a Smoker due to a Horde surrounding the Survivor, the Survivor only takes damage from the Horde, and not the Smoker. When killed, a Smoker leaves a haze of dark green smoke-like gas (hence its name), obscuring the vision of the Survivors and causing them to cough if they stand in it, thus disabling them from calling out on found weapons/ammo or other Special Infected. Like most other Special Infected, a melee hit from the Smoker does about twice as much damage as one from a Common Infected. Only one Smoker is normally allowed on the Infected team while playing Versus, unless there are computer-controlled Infected. Some have suggested that the mutated "tongue" could actually be intestines. Occasionally, when killing the Smoker, hundreds of feet of "tongue" will spew from his mouth, supporting the intestines theory. A second theory leading to the Smoker's mutation is that the strain of Infection has caused a type of fungus or similar bacteria to grow on his face. This could be responsible for the spores or smoke clouds and his tongue(s) since, in many cases, fungi have been known to grow tentacle-like appendages that appear similar to tongues. This is supported by the fact that upon death, the Smoker's mutated tongue disappears, and you can see the true tongue in his mouth.

A third theory is that the Smoker had cancer (probably tongue or throat) before becoming Infected. This is supported by the fact that cancer occurs when a cell or group of cells mutate to the point the Hayflick limit breaks, so the cells don't stop reproducing. Since there are cancerous growths all over the Smoker's face and upper torso along with the extra tongues protruding from the growths, this may be true; it would also explain how the Smoker's tongue regrows so quickly after being snapped from the base. A fourth theory is that part of the Infection gives the Smoker regenerative abilities, similar to cancer.

The Smoker has a different physical appearance in Left 4 Dead 2. The Infection has caused the Smoker to now have very large lumps and tumor-like appendages on his left arm that are larger and bulkier than that in Left 4 Dead, hinting at a form of Infected strain for the Smoker. However, there is a lack of tumors on his right arm, except for a small cluster of boils near his wrist.

It is possible that this tumor is actually a mass of muscle that grew there to propel its tongue. The skin is also no longer dark gray, but normally colored; seems to have more shine to his skin, as if the Smoker is covered in either infectious pus or some other oily substance. In terms of clothing, he now wears a blue T-shirt and jeans with a slight sag that show the waistband of its undergarments, bearing the fictional brand name "SKIVS".

These extra tongues have no effect on gameplay.

The Smoker also appears to be limping and is unable to move fast compared to most of the other Special Infected.

Upon seeing a Smoker

Just before being ensnared

Just after being ensnared

"The whole point of the Smoker is not to kill. It is, however, to slow down, separate, annoy, and generally injure the Survivors, aiding your team in slowly killing them. Any kills made is just an added bonus."

The key point to the Smoker is to be patient and wait until the Survivors are distracted and busy before stealing someone from the group; only then can the Smoker's ranged attack be effective at any time. How useful a Smoker can be depends on the environment as well; if a deadly hazard is between the victim and the Smoker, they can be forced into said hazard. Pulling Survivors towards Witches, fires, and the edges of large drops is an incredibly useful tactic that other Infected, such as the Hunter, cannot do.

There are a number of places a Smoker can pull a Survivor to that will result in instant death or incapacitation. There are also a few places where you can grab a Survivor and others will not be able to help them.

The first two chapters in this campaign were practically made for Smokers, as they have an incredible number of extremely dangerous spots for the Survivors if they are pulled by a Smoker.

The original design of the Smoker was to "pop in" to the Survivor group in a cloud of smoke, seize any Survivor, and "pop out" again to leave the unlucky Survivor stranded. Valve changed the design, however, saying it was "too challenging for the players." This design has never been seen in any video footage, suggesting that it was dropped early in development.

In early footage, the Smoker seems to have had the ability to release pitch-black smoke whenever he wanted to. If the Survivors were near the Smoker when he fired his smoke, they would have been pushed back, as if they were hit by a Boomer explosion. In addition, the Smoker's tongue would drag a victim at a significantly faster rate, but the victim would be able to fire at the Smoker while they were being dragged. Not only that, but apparently during beta gameplay, the Smoker's tongue was unable to lift the Survivor caught above the ground should the Smoker be on higher level. In this instance, a caught Survivor would not be hanging, but rather still on ground level attempting to break free. A video of the old Smoker behavior can be seen here.

A later video shows that the player took something called "poison damage" from a Smoker. When a person was affected by poison damage, the damage inflicted would turn into temporary health.

During development, it was possible to release the tongued victim, via right click while a Survivor was being pulled. This can still be accessed by using the console command tongue_allow_voluntary_release 1. 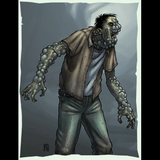 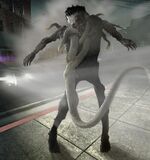 An early version of the Smoker from the Left 4 Dead beta.

Another early version of the Smoker.

Another early version of the Smoker. Note the lack of its spores that normally surround it. 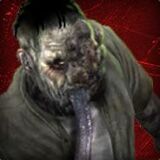 The Smoker he appears in "The Sacrifice" digital comic. 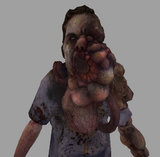 The Smoker killing one of the soldiers in the comics.