Latches on to Survivors and forces them in certain directions.

"That ain't right for a man to be ridden like that."
―Coach
"Is this thing humping me?!"
―Ellis

The Jockey is a Special Infected that appears in Left 4 Dead 2.[1]

The Jockey has the ability to jump onto the Survivors and cling to their head and upper-back. From there, he can steer the Survivor while clawing at their face.[2]

Valve stated that the Jockey was made to work in tandem with the Spitter by "steering" Survivors into the Spitter's acid. However, they are much more notorious for steering Survivors into an early Tank fight or right into Witches if they are nearby.

The Jockey is voiced by Dee Bradley Baker.[3]

The Infection has caused the Jockey to develop a large amount of muscle mass on his upper back and neck, making him hop around in a spider monkey-like motion. His fingers and toes have increased in length, adding to his baboon-like profile. His lips, and the skin surrounding them, have deteriorated away, giving him a more skeletal look at the mouth area. This could possibly be due to him chewing and biting away at his lips because of mania, or possibly even clawing at his mouth due to the same reason. He wears a tattered white T-shirt and blue boxers. He has a gibbering vocalization, and cackles hysterically while riding a Survivor. According to Valve commentary, the mutations are the cause of the Jockey's mania, causing the Jockey to laugh.[4] When playing as the Jockey, his hands are curved downward, similar to a praying mantis. The arms, however, stick out straight, and sport a coat of what appears to be blood. The hands are always twitching and shaking (the right one twitching notably more often than the left), and he doesn't stop laughing until death. When there is a Jockey on the back of a Survivor, the Survivor can still move to resist the Jockey's influence over them, though this only has a slight resistance and will merely slow the Survivor to a slow walk. Also, against what is commonly believed, moving in the same direction as the Jockey will not make it steer you any faster, even though, theoretically, it should.

The Jockey is a Special Infected that has animal-like characteristics. He can use his ropey frame to jump long distances at a time, and about 15-20 feet when leaping upward. Though he can not jump as far as the Hunter, he does not have to crouch to charge up the ability. When the Jockey lands on a Survivor's head, he grabs onto them and claws at the Survivor with his free hand while leaning in a direction to cause the Survivor to stumble. The clawing does not do as much damage as the Hunter does (dealing only 1 damage at Easy difficulty, 4 damage on Normal). Some players may have noticed that this does not always require leaping, as sometimes just landing on them from a higher area will cause him to grab on. The player can try to steer in a better direction, but can't outright resist where the Jockey drives them. When a player is incapacitated, the Jockey leaps off of the Survivor.[5]

When a Jockey successfully incapacitates someone and jumps off, it will take approximately 30 seconds before he can jump onto another Survivor. However, if the Jockey was knocked off, the recharge-rate will be considerably shorter — around 7 seconds. Jumping up and not successfully landing on a Survivor will enable an almost instant recharge for another attempt. In Versus, the Jockey does 4 damage per claw and can claw once every second, and 4 damage per second while riding on Survivors with no damage delay, meaning the Survivor will start taking damage the moment a Jockey lands on them. While riding a Survivor, the Jockey is able to steer Survivors away from a group or off a ledge.[6][7]

While the design of the Jockey was being worked on, an Infected wearing horse jockey satins was used as a placeholder. This was later changed to his current look at an unknown point. Also, concept art shows the Jockey as being gray-skinned, much larger and more ape-like, as well as being completely naked. Another shows him without a large amount of muscle mass around his neck and upper back, as well as being much more skeletal.

An early version of the Jockey's attack had the Survivor stay in first person with the Jockey's hands obscuring the screen. The Jockey was supposed to be the first Special Infected with the ability to dismount his targets after mounting or ensnaring them at his own will. However, this trait never appeared in the final version of the game. 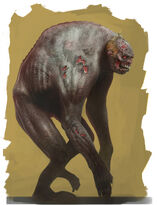 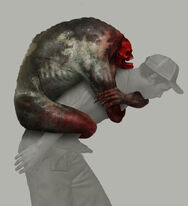 Another image of the Jockey. 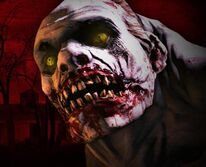 A close-up photo of the Jockey.