Able to leap long distances and off walls, can pin Survivors by leaping on them

"Yeah, you better hide! Sweatshirt wearin' little wuss."
―Francis
"So that's a Hunter, huh? What's he gonna do, go for a jog at me?"
―Nick

The Hunter is an agile Special Infected[1] whose mutation has granted him incredible strength and agility. His role in both Left 4 Dead and Left 4 Dead 2 is to kill or grievously injure individual Survivors who have become separated from their comrades.

The Hunter is voiced by Mike Patton.

The Hunter appears in a faded blue hooded sweatshirt and dark brown sweatpants. His hood is always pulled down and over his face, which on close inspection, reveals that the skin around his eyes has either been clawed off or has mortified as a result of the Infection.

What remains of his eyes emit the white reflective glow displayed by Common Infected in the dark; although this effect may be light reflecting off the blood leaking from his eye sockets. The limbs of his outfit are battened down with duct tape, in a manner similar to Traceurs, practitioners of parkour, which is done to lessen wind resistance.

Hunters are primarily identified by their distinctive and intimidating growl, or the screams and snarls they emit upon sighting a Survivor or whilst attacking. Hunters are the only Special Infected who do not make any noise while in a passive state.

The Hunter is the least visibly mutated Special Infected and superficially resembles a Common Infected. It has yet to be explained how the Hunter's mutations onset, whether it be genetic, biochemical, or a Hunter-specific strain of the virus, but the mutations seem to be sex-linked as only male Hunters have been observed. The Hunter's reaction to the Infection has granted him a dramatic increase in lower-body strength.

While not creating massive muscle growth like the Tank, this added strength has given the Hunter the ability to repeatedly jump and pounce from long distances and rapidly scale the sides of buildings with ease, as well as toughened his legs in order to withstand the great distances and heights he can achieve. Decreased pain response visible in all sufferers of the Infection also results in the Hunter not suffering from perpetual lactic acid build up from muscle overexertion or impact damage after experiencing a large fall.

At the same time, there seems to be some sort of muscle delay after an initial attack (post-attack recharge) where the Hunter is not able to move as swiftly. One of the most notable physical observations is that the Hunter lacks eyes. Whether this is self-inflicted, a by-product of the Infection, or both, is unknown.

The extent of damage to the Hunter's sight suggests his other senses are far more developed than those of typical Infected, allowing him to hunt with far greater efficiency. It is possible that the screeching noises he makes and the growling are his own echolocation method. He might also use scent to tell the Survivors apart from Infected. As with the other Special Infected, he is not distracted by such high-frequency noises as Pipe bombs or car alarms going off. Hunters also appear to be the only Infected with a self-defense reflex: when shot at a distance and knowing they cannot pounce, the Hunter will sometimes jump away into safety.

As with all the original Special Infected (excluding the Witch who kept her original model), the Hunter received a change of appearance in Left 4 Dead 2. Parts of his outfit have been ripped away, revealing his skin heavily disfigured by clusters of boils and scratches, similar to that of the Smoker. His left wrist remains wrapped in tape along with fragments of his sleeves, while his right hand is bare with a visible band of heavily bruised flesh where the duct tape would have been, possibly from muscle growth around the tightly wrapped tape. It is most likely that the boils on his body are tissue of muscles that have started to grow outside of his body as a result of the inhuman abilities the infection have evolved his body to. And/Or being a trait of his ability to have superhuman amount of energy by storing a large amount of fat on his body.

He has lost his shoes, and his feet seem to be covered in a mixture of mud and blood. His hoodie now has a zipper, has a wider hood, and much more blood spattered upon it. His face is now entirely obscured in the shadow of his hood, showing only the bottom half of his face. His fingernails have grown in length and thickness, giving his hands a closer resemblance to animal claws.

The Hunter's signifying scream of seeing a Survivor is different, higher in pitch than the previous version; however, both of his original screams are still featured in Left 4 Dead 2. His screams become louder and more high-pitched as he nears.

It seems likely that most of the differences in the Hunter's appearance in Left 4 Dead 2 were caused by the Hunter himself, clawing at his restrictive taping and clothes in an effort to remove them. However, the growth of his nails, his amplified scream, and the increase of deformation upon his skin suggests that the Hunter has mutated further from his manifestation in Left 4 Dead.

Fitting with his name, the Hunter excels at picking off lone or vulnerable targets due to his pounce ability. With it, he is able to travel large distances to attack his target, and his pounce is able to kill a healthy Survivor the quickest out of any non-boss Special Infected (eg. the Witch or Tank). In Versus, the Hunter gains the ability to deal up to 25 landing damage based on the distance he travels, which further encourages the player to single out targets.

The Hunter has two attacks: a claw attack, which does 10 damage on Normal and 6 damage on Versus, and a pouncing attack, which pins down a helpless Survivor while the Hunter claws at them dealing damage every 0.5 seconds. The Hunter will not stop until he has killed the Survivor, been killed himself, or shoved off by another Survivor or an explosion.

If controlled by a player, the Hunter is able to deal damage with the actual pounce itself. Any pounce, regardless of distance traveled, deals a minimum of 1 damage to the pounced survivor. Successful pounces from a great distance can cause up to 25 damage, which makes them the most powerful individual attacks in the game which can be caused by a playable non-Tank Infected. The pounce also cause a stumble to the view of pinned survivor, and long-distance pounces usually cause more severe stumble. AI-controlled Hunters can also do pounce damage in a similar way in versus mode but cannot do such in campaign mode.

The Hunter can be dead-stopped by shoving him when he is in the air and is about to hit you. This requires good timing, but can be very useful if the player can get the hang of this. Though doing this is a bit risky on higher difficulties because AI Hunter will actively try to claw you, which might result in more damage taken.

When a player takes control of the Hunter in Versus mode, the Hunter's pounce ability is measured by meters from where the player crouches down. The time it takes for his jump to charge is 1 second.

Fast and agile, this Special Infected will growl and scream to inform you of his presence. The Hunter is often used as a distraction by both AI and human Infected. Inexperienced players fare especially badly against Hunters since their attack is often much harder to avoid than the tongue of a Smoker or the bile of a Boomer.

Without timely intervention, Hunters can kill very quickly; the only exception is the Witch and The Tank on Expert difficulty. While Hunters are hurt by being on fire and will eventually die, any Survivor pounced on by a flaming Hunter will suffer much more damage from the attack (as of an update, only dynamic fire sources such as those created by the Molotov and gas cans add to the damage bonus). However, in Left 4 Dead 2, this hidden effect is removed.

Players can train their Survivor skills against Hunters in the Mutation "Hunting Party", as the only Special Infected the Director can spawn are Hunters (apart from the occasional Tank and Witch). You can train your skills against them in other modes, but expect less Hunters to train on because of this.

"The Hunter was designed to punish the Survivors that have wandered from the others rather than attacking the main pack. They serve as the "strong-arm" of the Infected, being very adept at finishing off Survivors. By coordinating with other Infected, the Hunter becomes a valuable ally, and a deadly foe."

Generally, any high location such as the roof of a building, a fire escape, or a lamp post will do significant damage to a Survivor if pounced on. Here are some level-specific areas that will decide a Survivor's fate.

The Hunter has an unused animation of him hanging upside-down. It is unknown how this was supposed to be done in-game, as no pre-release footage shows the Hunter doing this. A probability was that you were to leap off it and start attacking the Survivors, or you went up there when you went idle and the A.I. took control and would climb a ceiling to stay hidden until you came back to the game.

Originally, when a Hunter pounced a Survivor, there would be no special visual indicators (such as the red light around the Survivor).

The Hunter's ability was originally to become invisible. It did this when backed up against a wall, then the pounce ability could be used. For some reason, it was cut to just leaping, possibly due to that Left 4 Dead tries to keep a realistic theme, and an invisible Infected may have simply been too far-fetched. It also could regenerate, but this was cut along with the invisibility.

During development, you used to be able to jump off Survivors after you pounced them by holding crouch then primary fire again. This was cut, although some modded servers turned it on.

Pre-release footage of a Hunter pouncing Zoey. Notice the lack of red light around Zoey.

An early version of the Hunter. Note the five o'clock shadow instead of blood on its face.

Another early version of the Hunter model. 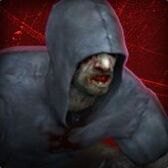 Head shot of the L4D1 Hunter.

Louis describing a Hunter to the soldiers at Millhaven in The Sacrifice comic.

The Hunter in The Sacrifice comic 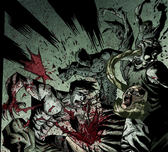 A Hunter without a hoodie attacking the doctor in the Sacrifice comic part 3.

Notice that the Hunter is covered in blood during prolonged pouncing