Charges Survivors to pin one down and send the others flying

"So that's a Charger, huh? I think he worked out that arm plenty, he should move on to back and legs."
―Nick
"Don't stand there! Kill this thing!"
―Coach

The Charger is a Special Infected introduced in Left 4 Dead 2. His main purpose is to separate a group of Survivors who are close together by grabbing one and carrying them away while crashing into the rest of the group, sending them flying through the air. While he matches the Survivors' pace, he speeds up considerably when charging. However, the Charger cannot stop or turn during the charge until he hits a wall or travels a certain distance.

The Charger is voiced by Dee Bradley Baker.[1]

The Charger is a large Infected, close to the Tank in height and about half as wide. Unlike the Tank, the Charger's legs are capable of supporting all of his weight, and thus stands mostly upright. His hairless skin is a deep greenish-gray in color, and he wears bloodstained denim overalls with one broken strap and a green sneaker on his right foot.

The Charger's mutations appear similar to the Tank's mutations in terms of increased muscle mass, though noticeably asymmetrical. Most notably, the Charger's right arm and shoulder have grown significantly and have increased in thickness, resulting in his right hand becoming a swollen lump with stubby fingers. This causes him to lean to the right while moving. His left arm, inversely, has atrophied to the point of being useless (possibly from his body breaking it down to add bulk to his right arm), hanging limply to the Charger's side and flapping around with every movement.

His legs are less visibly affected by mutation, with only his left leg gaining any sort of extra bulk (to the point of ripping his overalls) while the right leg's proportions remain normal. The leg mutations are possibly to balance the Charger, equalizing the weight distribution throughout the body and enabling him to move quite fast.

Due to the Charger's preferred method of attack, he has sustained multiple injuries, especially on his right arm―prolonged times of bashing and slamming into walls has made the flesh of the Charger's right arm thick with calluses, scabs, and scars. Most likely a result of his constant charging, right half of the Charger's face is visibly damaged. His cranium has a large dent, he lacks teeth, and his nose is completely removed, with blood running from it.

Like other Special Infected, the Charger has a distinctive sound. He is loud, making noises vaguely similar to human speech and barking at enemies in a high-pitched tone. He will also screech upon spotting Survivors and release a loud yell when charging.

The Charger similarly to The Tank also appears to have retained some form human speech as some of his sounds can be heard as phrases like "Charging Hurts my Bones", "Already Dead" and "Don't Shoot Me" if listened carefully.[2]

While charging, the Charger will run quickly forward with his right arm raised in front of him, using it to grab a Survivor. He will run faster than a healthy Survivor while charging.

If he fails to a grab a Survivor, he will automatically stop upon running 80-90 feet if no obstacles are in his way. If he does crash into an obstacle, then he stumbles and takes 2 damage from his crash. Should he grab a Survivor, then they take 15 damage regardless if they crash into an obstacle or not. Once he grabs a Survivor and stops, he will begin smashing them against the ground, ceiling or wall repeatedly until they die. Nearby Survivors can be sent flying into the air if they are near the grabbed Survivor, dealing the same amount of damage to them, along any potential indirect damage.

Unlike the Hunter, Smoker and Jockey who can be shoved to free the trapped Survivor, the Charger's immense bulk means that only explosives will work in stumbling him.[3]

As a general rule, always attack Survivors that are in a narrow area, in a straight line, or otherwise tight clump. Take advantage of the larger open areas; the further away you can take a Survivor, the harder it is for their team to rescue them. Your charge is deadly near ledges and cliffs.

Concept art shows that the developers had planned for the Charger to be either a large zombie with an armored upper skull yet tiny T. rex arms or a "tripod" doglike animal. Traits of both can be seen in the final version: the Charger has three functional limbs and one floppy tiny arm, as well as an exposed skull.

Before the Charger's design was finalized, it used a re-skinned Hunter model so that the team could test out how the Charger would play while the art team was designing it. When the Charger design was finished, as like any other Infected, they recorded temporary sounds. The Charger's temporary warning call was "AY! AY! AY!", as said in the Developer's Commentary.

Originally, the Charger had many different series of attacks and has gone through multiple versions with different twists on his charge attack. In one version of his build, his charge attack caused him to trample over Survivors rather than grab them, and his melee attack was replaced with an overhead strike that smashed the Survivor to the floor before the Charger started pounding them. This behavior can be seen here. In another build, the Charger used his mutated arm to lunge forward (as if it was a one-armed simian) repeatedly. At this point in the game, the Charger would stop after grabbing a Survivor; however, when the Charger could carry the first Survivor they tackled, this animation was cut.

When most of the Charger's model was finalized, he had a much more bloody and gaunt face that exposed his skull.[5] 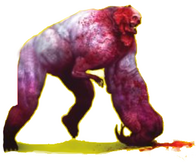 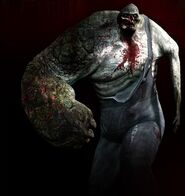 Charger as it appears in the Zombie Survival Guide Trailer. 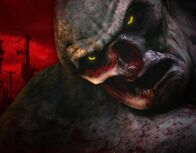 A close-up photo of the Charger. 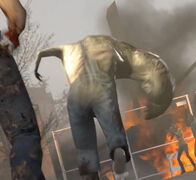 The Charger runs to the survivors in the L4D2 teaser trailer.

A Charger rams into Ellis.