"Looks like we're heading the right way to the mall."
―Ellis
"We're gonna have to go to this Ducatel Diesel."
―Coach

Solar Message Signs (also known as Solar Portable Message Signs) are electronic traffic signs often used on roadways to give travelers information about upcoming special events. Such signs warn of traffic congestion, accidents, incidents, roadwork zones, or speed limits on a specific highway segment. They are seen in Left 4 Dead 2 in the Dead Center and Hard Rain campaigns, displaying messages to the Survivors about locations and objectives they should reach. They are simply environmental elements and props to give players a more realistic atmosphere and guide them to the main objectives; however, players can choose to ignore them completely if desired as they are not a necessary objective to complete like their counterpart, the Power Generator, is.

The Solar Portable Message Signs are a trailer component that can be attached to any vehicle with a trailer attachment thus making them portable. They have two wheels, standard brake lights (used when driving), two cranks which are used to adjust the display and angle of the solar panels, four legs which hold the trailer down to the ground and prevent it from rolling away, as well as a battery box and key configuration box to display what digital message to say. They usually appear in a bright color such as orange or yellow to be more visible to people as well as the digital text or wording with a black background. They also are equipped with two sets of solar panels which gather the energy of the sun to power up the digital text or sign. The trailers are usually detached from the vehicles towing them and left in a temporary area of need to inform the public of upcoming or current events―in this case, the Green Flu virus outbreak. The signs can be configured in any way to display whatever messages to the public. Most messages had words and numbers as well as direction arrows which pointed people towards a specific location.

When the Green Flu virus could not be quarantined or contained, CEDA began mass evacuations of several cities along the eastern coastline. As well as putting up posters and advertisements around the cities, they commandeered these signs from construction companies and city work services to help with the evacuation of citizens. In Savannah, when the virus began to consume the city, CEDA set up multiple evacuation centers throughout the city. They used the trailers to inform the public of other evacuation centers and the directions to get to them. Just outside The Vannah Hotel, a Solar Message Sign is used to inform evacuees of another CEDA evacuation site at Liberty Mall to prevent overcrowding at the hotel. Several other Solar Portable Message Signs are seen just off the Interstate keeping the evacuees updated and heading in the right direction towards the mall.

In the town of Ducatel, when refugees were fleeing the town and taking as much gas and fuel as possible, CEDA also placed a sign here informing any Survivors that are left behind or passing through to find any remaining fuel at the Ducatel Diesel. However, once the storm occurred, much of the signs were disabled and shorted out due to the flooding. On rare occasions, the Solar Portable Message Sign near the Burger Tank can be seen displaying "CAUTION! ZOMBIES!! AHEAD!!! to the Survivors when disabled in the rain.

In some custom campaigns, the authors or creators configured these digital messages to display sometimes useful or irrelevant messages. For example, it can be seen on the final chapter of Detour Ahead. The author placed a Solar Portable Message Sign near the highway which amusingly read: "CAUTION! ZOMBIES!! AHEAD!!!" which is in fact true due to the fact that players are on the finale.

The first trailer seen near The Vannah Hotel informing the survivors another evacuation site. Note the dead CEDA agent on the trailer.

Another trailer in Savannah which informs the public to find an alternate route to Liberty Mall. 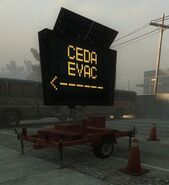 The trailer near Liberty Mall pointing towards the CEDA evacuation site.

The trailer near the Ducatel Gas Bar which informs Survivors of the nearest gas station with fuel.

The trailer sign from Detour Ahead which humorously reads the following...

A sign at night which brightly points towards the Survivors the CEDA evacuation site.

A digital traffic sign's default message working off battery power while shorting out in the dark rain. It is also seen attached to the pickup truck.
Add a photo to this gallery

Retrieved from "https://left4dead.fandom.com/wiki/Solar_Message_Sign?oldid=154348"
Community content is available under CC-BY-SA unless otherwise noted.