"Oh, MAN! This is just like Counter-Strike!"
―Louis
"Rifle for me."
―Rochelle

The SG 552 is a fully automatic assault rifle, very similar in capability to the standard in-game M-16 Assault Rifle, since it has the same non-scope accuracy and damage per shot, but has a bit higher fire rate and has a 2x scope, which accentuates its long-range accuracy, much like a Hunting Rifle or a Sniper Rifle, but not nearly to the same degree as either of these weapons. Using the scope also reduces the weapon's rate of fire.

When used without sighting through the scope, the SG 552 has extremely tight crosshairs when fired from a standing-still posture on account of it being a hybrid between an assault and a sniper rifle as it's a scoped rifle. Reloading is slower than that of the M-16 Assault Rifle, but is still faster than the Combat Rifle. 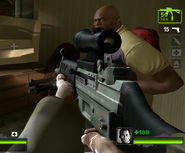 SG 552 firing upon Common Infected in a hallway