"My name's Rochelle. I produce a news show."
―Rochelle
"Hey, kill all sons of bitches, right?"
―Rochelle to Ellis, handing him his Grenade Launcher in the Zombie Survival Guide Trailer.

Rochelle (also known as Ro) is one of the four playable Survivors in Left 4 Dead 2.

She was employed as an associate producer on a television news station in which role she was sent on assignment to Savannah (the location of the first campaign) to cover The Infection's breaking story.

Her pink T-shirt features an image of the British electronic band Depeche Mode.

Rochelle's facial features are based on Shanola Hampton and she is voiced by Rochelle Aytes. 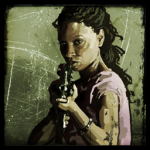 Rochelle plays the role of the "big sister" of the group, and almost everyone treats her with generous respect. Socially, she is also the character who gets the most congenial response from outsiders such as Francis and Whitaker. She is portrayed as sensible, levelheaded, and kind to everybody and as possessing a dry sense of humor that comes out, for example, in relation to the ostensible artistic and performance merits of the Midnight Riders and Jimmy Gibbs Jr.

She also is the most sensitive to the Left 4 Dead Survivors' situation in the wake of Bill's recent death and gives them the option of not lowering the bridge at all. 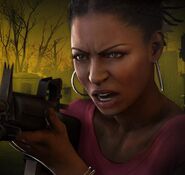 A close up photo of Rochelle.

Rochelle as she appeared in E3 version of The Parish poster. Notice the change of hair style compared to the final version.

Rochelle with a Combat Shotgun as seen in game.

Rochelle with a Sniper Rifle.

Rochelle with a Chainsaw.

Rochelle on the magazine cover of PC Gamer, August 2009.

Ellis and Rochelle on the cover of the August 2009 issue of the Official Xbox magazine. 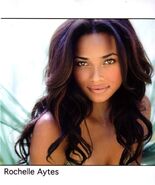 "Kill all sons of bitches, right?" 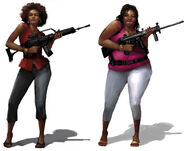 Claudette Morel as Rochelle from Dead by Daylight.