"Welcome to Riverside HELL"
―Road Sign
"The town's pretty quiet. I hope that means they killed all the zombies."
―Zoey

Riverside is a small suburban settlement in Pennsylvania. It is the setting for the last three chapters of the "Death Toll" campaign, which takes place in Left 4 Dead.

Prior to the outbreak of the infection, Riverside was another standard sleepy American suburban town with a population of around 3,450.[1] The town is centered on its main street which betrays its 18th- or 19th-century origins whilst following a typical contemporary American small town strip development with an eclectic mix of retail stores, low-rise office and commercial buildings, and a movie theater.

After the infection broke out, the U.S. military attempted to convert the town into a safe point working alongside the media trying to inform the public. In default of "a better plan," the Survivors decide to strike out for Riverside and their journey to this town forms the basis of both the "Crash Course" and "Death Toll" campaigns. Unfortunately, Riverside has been overrun by the time the Survivors get there. Also, they find that not only has the military abandoned the town, but many of its personnel have become infected and form a significant component of the common Infected now occupying the place.

A notable aspect of Riverside is the valley church at which the Survivors make the acquaintance of the ever-paranoid Church Guy who has cracked under the psychological pressure and been "bitten" by an Infected. One way or another, he ends up ringing the church bell which triggers a Crescendo Event and obliges the Survivors to fight for their lives against waves of the Common and Special Infected. Riverside itself is densely populated with Common and Special Infected―including at least one Tank and Witch.

The aforementioned main street was evidently designated a key defense point by the military and they set up a fixed minigun and even went so far as to use combat engineers to build a vast earth and rubble barrier across the street.

Riverside as seen from Whitney County in "Crash Course" 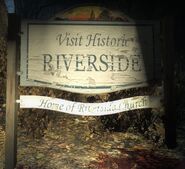 Ad to visit Riverside, known for its church

Main entrance to Riverside which has been barricaded by the army

Shops and stores in Riverside

More shops and stores in Riverside