Edit
watch 02:52
Roblox: DeepWoken - The Loop
Do you like this video?
Play Sound

The Propane tank can be found throughout both Left 4 Dead and Left 4 Dead 2. An in-game propane tank is presented in the form of an everyday bottled propane gas canister most commonly associated with domestic heaters and barbecue grills. They show up very frequently in Survival Mode.

They can be picked up with the Use key (default: "E" for PC or "X" for Xbox 360) and will blow up with an explosion similar to that of a pipe bomb when shot. Like the oxygen tank, this weapon is commonly used during finales in order to set up traps - in this instance, selecting a weapon or pressing the Use key whilst carrying a Propane Tank causes the tank to simply drop and thus allows it to be placed fairly accurately.

A Propane Tank can also be thrown like a grenade (using the designated USE key) but the distance it travels is relatively short and it must still be set off with a gun shot. Nevertheless, a skilled player can use this ability to even the odds when, for example, a horde is in sight. Like Gas Cans, this weapon can be used to batter Infected with melee. Note that Propane Tanks will explode when enveloped in flame from a Molotov or a burning gas can.

The Propane Tank's blast radius seems to have been increased in the Crash Course DLC. 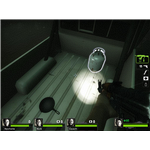 A propane tank lying on the truck with a Frying Pan.