"FIRE IN THE HOLE!"
―Zoey
"Chase this, you zombie bastards!"
―Nick

The Pipe Bomb is an IED that can be used offensively, defensively and for diversionary purposes.

The visual design is stereotypical but with the addition of a bright red LED and loudly beeping smoke detector to attract Common Infected when armed and thrown. Pipe Bombs explode five to seven seconds after being deployed.

Its blast radius is relatively small, being confined to little over three to four meters (10 to 13 feet) on the normal difficulty setting; however, since a well-deployed Pipe Bomb is usually tightly surrounded by enemies, as many as 20 or more can be killed at once. Since a Pipe Bomb blast can injure a Survivor, care is needed to ensure that teammates are at a safe distance when one goes off.

Pipe Bombs can be an extremely useful weapon in many situations. The Pipe Bomb can be used offensively to clear out an area, defensively against a Horde or to draw off enemies from an incapacitated teammate, and for diversionary purposes such as when disengaging at the end of a finale.

According to the game's Developer Commentary, the Pipe Bomb did not have the flashing light when it was originally conceived; instead, it served as a conventional grenade. There were some issues with this, however: rushing Infected would ignore the grenade, and often run past it, making the Pipe Bomb useless unless perfectly timed. A worse problem was when the grenade would bounce off the Infected and back toward the thrower. Valve fixed the problem by making the Pipe Bomb attract Common Infected, and added the oxygen tank to perform the role of the earlier Pipe Bomb.

It is likely that the Pipe Bomb was a regular grenade at one time. Hidden in the game's files is a very early grenade icon for the HUD; this grenade looks exactly like the Counter-Strike: Source HE Grenade.

One of the proposed uses of the Pipe Bomb was for it to be an anti-Tank weapon. This ability is discussed in the Developer Commentary and can be seen in this video dated August 27th, 2008. While the video doesn't show the Pipe Bomb killing the Tank, it portrays it as useful against one.

A Pipe bomb when it didn't have a smoke detector. 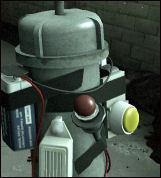 A close up of the final version of the Pipe Bomb.
Add a photo to this gallery

Retrieved from "https://left4dead.fandom.com/wiki/Pipe_Bomb?oldid=158039"
Community content is available under CC-BY-SA unless otherwise noted.