The Pawn Shop is located in the city of Fairfield. It is seen at the end of Chapter Two and the beginning of Chapter Three of the No Mercy campaign and serves as a safe room for the Survivors.

One of several pawn shops located in Fairfield, the people used to be able to pawn a variety of items for cash. The phone number for this particular store is 215-885-CASH as seen on the store name (Above the door). However, the address is unknown and not displayed. This pawn shop's specialty was cash loans and jewelry as seen by several ads around the shop itself. However, the shop is also willing to cash in on larger appliances such as computers, televisions, microwaves, guns and weapons and even a piano. The people can also purchase money orders at the shop. There is an ATM located inside the store as well.

With the Green Flu infection breaking out in all parts of the city, the owner seemed to close his shop down and converted the back room of the pawn shop into a safe room. He stocked up on weapons and ammo, military K rations for food and attempted to barricade himself there. However, when CEDA placed the entire street area under quarantine, he may have been forced out and headed towards Mercy Hospital to await evacuation.

When the Survivors exited Fairfield's underground subway system after activating the generator, they saw the hospital in the background and headed towards the Pawn Shop to navigate around the street barricade. They headed inside and rested in the back room and gather supplies before heading out to a nearby Burger Tank restaurant and the hospital. 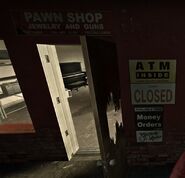 Entrance to the Pawn Shop

Inside the Pawn Shop

Inside the Pawn Shop with the piano

The back room which serves as a safe room

Inside the safe room near the exit

The opposite side of the exit inside the safe room. Note the empty gun lockers
Add a photo to this gallery

Retrieved from "https://left4dead.fandom.com/wiki/Pawn_Shop?oldid=158956"
Community content is available under CC-BY-SA unless otherwise noted.