Edit
watch 02:46
The Quarry - The Loop
Do you like this video?
Play Sound

The P220 Pistol is the backup weapon of the Survivors in Left 4 Dead 2, replacing the M1911 Pistol from Left 4 Dead. It is one of the weapons they can use when knocked down, although with a slower rate of fire, greatly decreased accuracy and slower reload time. The Pistol is one of the only weapons that has infinite ammunition. However, it is still limited to a magazine capacity of 15 rounds. The P220 pistol's damage fall off is it loses 25% damage per 500 Hammer units. It has a max range of 2500 Hammer units.

Even though they are meant as emergency weapons, Pistols make great secondary weapons, or even primary weapons for Grenade Launcher or shotgun users. They pack a punch larger than that of the M16 Assault Rifle, but smaller than the Combat Rifle, and possess better accuracy than most of the Tier 1 weapons. Pistols will usually spawn on the first level of each campaign. This occurs most frequently on Easy and Normal. However, on Advanced and Expert, they are often not available during the first level.

If a second Pistol is found, it will be a semi-automatic Glock 26 and the two pistols together can be dual-wielded. Second Pistols are placed periodically by the Director but can also be picked up when dropped by a teammate who has taken a Magnum or melee weapon. Dual pistols double the player's available pistol ammo capacity to 30 rounds and increases the maximum rate of fire from 300 to 600 RPM, increasing the rate at which the pistols can be fired significantly.

When dual-wielding two Pistols, the accuracy of each decreases, recoil increases, and reload time increases slightly. When dual-wielded, like the M1911 Pistol, the left-hand Pistol has no light. These Pistols are the only weapons in the game that can be dual-wielded.

Unlike the M1911 Pistol, it's possible to revert to a single Pistol by taking a Magnum or a melee weapon and then take the Pistol back. If you pick up a weapon that replaces the pistols, this will cause both to drop.

Originally, the P220 pistol had the same firing and reload animations as the M1911 Pistol. Early videos display this. 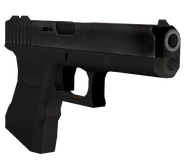 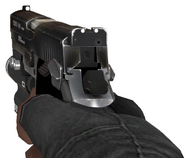