"I hate the Army."
―Francis

"Or they're gonna line us up against a wall and shoot us."
―Nick

The Military is an omnibus term for the unified military forces (or what remains of them) of the United States: the country that provides the setting for Left 4 Dead and Left 4 Dead 2. As a background entity, they play a part in attempting to contain the Infection, as well as scattering improvised military waypoints, outposts, and rescue areas along with military-grade weaponry for any living Survivors to defend themselves from the Infected. Unfortunately for the Military, many of its members have succumbed to the Infection and so appear (in their camouflage fatigues) as part of the huge hordes of Common Infected, or have been killed in action.

Involvement with containing The Infection Edit

Throughout the three weeks of the Infection, the Military was working alongside CEDA in an attempt to fight and stop the Green Flu epidemic from spreading. As CEDA failed to contain the virus, the Military eventually took over CEDA's responsibilities as the Infection spread throughout the country. Originally, the Military's strategy was to evacuate and rescue as many people as possible, but once that became less feasible, it is evident that a political decision was taken to declare martial law. This enabled the Military to institute more direct and draconian measures to contain the threat and to attack overrun areas of the country. One such measure involved the Military forcibly separating Carriers (people who were infected by the Green Flu, but did not show any symptoms) from non-Infected Survivors (people who had not encountered the Infected) and burying Infected corpses in mass graves (refer to The Sacrifice Comic). In The Park, The Survivors encounter piles of bullet-riddled uninfected corpses next to a decontamination trailer, a fact that Nick, Ellis and Coach may remark on at the time. The reason for these executions is unknown.

At the initial outbreak, CEDA policy banned civilians from possessing firearms (something many Survivors obviously ignored and which adds further credence to the theory that CEDA's grip on the situation was loose). However, when the Military took over these rules were overturned and civilians were encouraged to arm themselves for their own protection. Since it is probable that CEDA was first on the scene and operating in accordance with civil powers and legislation, its handling of the crisis appears to have been less aggressive in dealing with both the Infection and its concomitant breakdown in law and order, which could largely explain why its measures failed. Under martial law, the Military has a free hand to take whatever actions its command structure dictates, and for this reason its stance is both violent and ruthlessly direct. In this regard, several public notices seen throughout the Left 4 Dead series make it explicit that deadly force is authorized.

The arbitrary nature of martial law is well and subtly illustrated in each volume of Left 4 Dead. In The Sacrifice comic, the original Survivors are forcibly detained by the Military, escape from custody by a hair's breadth and vow never to have anything more to do with the Military (and thus organized authority). Their experiences thus lead them to trust no one but themselves and to declare their own "independence". However, in Left 4 Dead 2, despite evidence that it once executed civilians regularly, the Military keeps a helicopter in the middle of a horde of infected to save a small band of Survivors caught on the wrong side of a bridge set for demolition. At the same time, these Survivors maintain blind faith in the Military despite physical evidence and testimonials from the original Survivors that their lives and liberty may be forfeit once they are under the Military's control. In the final chapter, only street smart, ex-con Nick has the pessimism to express the possibility that the Military will line the Survivors "up against a wall" and shoot them.

Fairfield: After local law enforcement and CEDA failed to contain the infection within the city, the Military stepped in with a small force which was killed almost instantly. In response, they quarantined the city and began operations in Whitney County and Riverside.

Mercy Hospital: The Military worked alongside with CEDA and the medical staff at the hospital to help protect civilians and develop a vaccine for the disease; however, they were not able to hold out long enough. When trying to evacuate everyone by chopper on the rooftop of the hospital, they left a Minigun. A soldier's corpse is seen beside the radio.

Whitney County: Just outside the city of Fairfield, the Military set up a small outpost near the bridge in the county, most likely to aid the quarantine and containment of the Infection in Fairfield as well as aid fleeing refugees.

Riverside: Set up a command center in the town to monitor the situation in Fairfield. However, once the Infection spread to the outskirts of the city, the Military fled and abandoned the town completely.

Newburg: After CEDA failed to quarantine the airport and the city was overrun, the military heavily bombed it and the airport in the hopes of slowing down the infection. Despite this, illegal flights from the cities airport continue, leading the military to shoot down all airplanes entering the restricted airspace.

Daughtery Farm: The Military held out here for a while but had to pull out and return to Safe Zone Echo; they were not able to find any more Survivors. However, they left a radio for any future Survivors.

Rayford: Used by CEDA as a safe outpost, the Military had a small command center at the Army Reserve building (which was destroyed). They also aided in transporting Carriers in train cars, escorting live Infected specimens and carrying supplies and ammunition; however, the train crashed.

Atlanta: According to Graffiti in The Sacrifice, the Military and CEDA were holding out in Atlanta. It is unknown when this outpost was established, but according to a map found in The Hotel, it was overrun by day Twenty-One.

Whispering Oaks Motel: The Military set up barricades and occupied the motel as a screening facility, fortifying its defenses in an attempt to keep the infected at bay. The first Infected were detected at the motel and the military burnt their corpses in the drained swimming pool, eventually the military abandoned the site and rigged the nearby bridge to the amusement park to explode, buying more time for CEDA evacuations.

Village en Marais: Although told to keep out by signs, the military did send at least one paratrooper to a nearby swamp for unknown reasons (Possibly to investigate a nearby plane crash).

New Orleans: With the Green Flu virus inching towards New Orleans and CEDA's continuous failures in containing the infection, the military took over all operations and evacuations centers. The military was separating people into groups by Carriers and non-Infected. It seems the city became a huge war zone as refugees were fighting to survive by killing the infected, avoiding the military's harsh protocols, and being killed by other armed refugees due to paranoia. Graffiti found throughout the campaign suggests that the surviving refugee community created by the apocalypse realized that the asymptomatic characters — for instance, the Survivors in both games — were infecting the healthy population. Some of the uninfected refugees harbored an urge to murder the carriers to ensure their own safety and prevent future infection, while some few advocated for their forgiveness. People were told to head towards the Louisiana Naval Base where they would be evacuated by helicopter to the cruise ships out in the Gulf of Mexico; in the meantime, the military began bombing parts of the city to stop and slow down the spread of the infection.

The Waterfront: The Military received and processed civilians via boat at a restaurant and lined people up in what were once streets.

Bienville Park: Due to the overcrowded Bus Station Evacuation Center, CEDA and the Military had refugees wait in the park as people were slowly being processed at the bus station. Due to the risk of Infection, the military and CEDA boarded up the restrooms near the entrance and forced people to use the other bathrooms located towards the right of the park.

The Bus Station: A bus station in the heart of New Orleans that was used by CEDA as an evacuation center. The Military took over and started separating Carriers and the non-Infected. Civilians were rioting demanding to be evacuated, which escalated into chaos as the Infection continued to spread. The Military was forced to take action and shoot the civilians onsite.

Veterans Memorial Bridge/Louisiana Naval Base: A double-decker bridge in New Orleans was used to get to the Louisiana Naval Base where refugees would be taken by helicopter to cruise ships out in the ocean. After the Survivors escape the bridge, it is destroyed by military F-18 fighter jets to prevent further spread of the infection.

Evacuation Outpost Echo in at the farmhouse in Blood Harvest.

The ready room with radio and scattered maps at the farmhouse in Blood Harvest.

The last outpost at the raised bridge in The Parish.

A corpse holding a military radio at the raised bridge in The Parish.

The military is still active in rescuing living Survivors, though possibly due to thinning numbers, cannot afford to station personnel at every rescue area to greet and coordinate any Survivors. Nevertheless, they usually leave means of contact, generally via radio for any living Survivors to communicate with them. As the Infected are unable to speak any human language anymore, or use technology for that matter, the military can be assured that any attempt at communications will be genuine.

Places in which the military will actively send Rescue Vehicles:

Technologies used in the series Edit

The Military has been shown to be using a wide variety of vehicles that are actively in service with the military today, and some which have never been or have been pulled out of service.

In addition, the Military has a fair amount of firearms which are available for the Survivors to use:

It can be noted that many of the firearms the military has been seen to use are not in major US Military Service (like the M79, M60, M4A1 and M1911), although the presence of these goes towards the idea of the military arming their surviving troops with stored or obsolete weapons as a sign of desperation.

Throughout the Left 4 Dead series, the Military have also shown their presence via the use of posters and signboards displaying instructions and warnings. The use of deadly force by the military is repeatedly emphasized showing their seriousness compared to CEDA. Bill also mentions that the military is speaking out to Survivors through radios, informing people of where to go. Abandoned vehicles and military weapons have also been left behind as areas are overrun by the Infected. This is seen differently in The Parish, however, as F-18 Fighter Jets are seen flying above the New Orleans skyline making their bomb runs throughout the city trying to stop the Infection.

The howitzer left behind by the military in Crash Course.

Military personnel in The Sacrifice comic.

A U.S. soldier ominously cuts off communication with the Survivors in the APC used to rescue them from the Farmhouse.

A soldier knocks out Francis after he makes jokes about them.

One of the soldiers blatantly exposes Francis' plan to lure them into their Chamber to be overpowered by him.

A U.S. Army Humvee on the Boathouse Finale.
Add a photo to this gallery

These military signs can be found all around The Parish in Left 4 Dead 2. 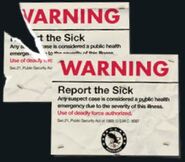 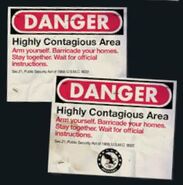 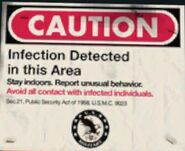 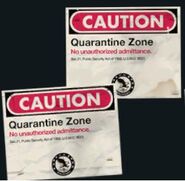 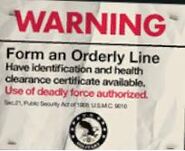 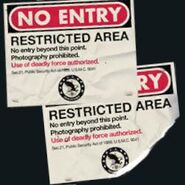 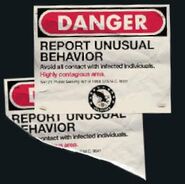 Add a photo to this gallery

Retrieved from "https://left4dead.fandom.com/wiki/Military?oldid=158643"
Community content is available under CC-BY-SA unless otherwise noted.