"I heard they gotta cancel a concert if there's a breeze cause any town down wind'll catch on fire!"
―Ellis

The Midnight Riders is a hard rock band in the Left 4 Dead universe. They are famous for their pyrotechnic light shows performed during their live performances. Though never encountered directly, several posters advertise them. They were scheduled to play at the Peach Pit in Whispering Oaks Amusement Park, but their performance was cancelled because of the infection. A jukebox in a café has their songs "One Bad Man" and "Midnight Ride". Alternate versions of these are played when Tanks attack during their concert: "One Bad Tank" and "Midnight Tank". It is hinted they escaped from the horde, even after refusing to stop their tour after the Green Flu came over. Graffiti in the final safe room of the "Dark Carnival" campaign mentions that the Midnight Riders were evacuated out by helicopter ahead of the general population. Their songs can be played on jukeboxes found in "The Parish, "Swamp Fever", "The Passing" and "The Sacrifice". 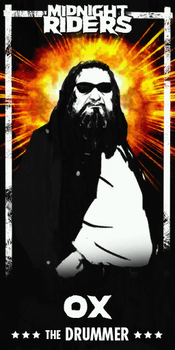 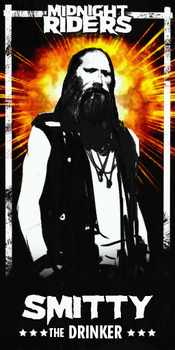 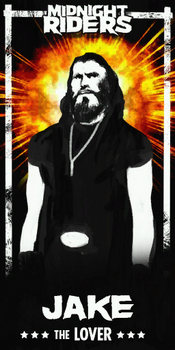 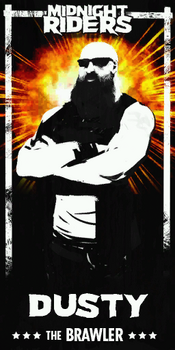 In 1983, with their chart-topping songs and the grassroots support of their loyal fanbase, four young men from Galveston, Texas became the most popular band in America. That band was Love Supply, they sucked, and on a fateful day in 1983, their opening act, the Midnight Riders, beat them so bad onstage that they became instantly famous.

The Midnight Riders decided to spend the next two years working on their first album, enjoying a little time away from the spotlight, and serving eight to ten years for aggravated assault in the federal correctional facility at Fort Worth. Luckily for Riders fans the world over, they accidentally hadn't killed any of Love Supply and, due to an overcrowding problem in the joint, all non-murderers were released in January 1985. Three months later, the result was their debut album We're Coming For You, Love Supply, after which the band Love Supply retired, and the mantle of Greatest Southern Rock Supergroup of All Time passed to them. That same year, on October 3rd, bass player Riggs Donner was tragically killed in a motorcycle accident while traveling without his helmet to his favorite local strip club, the Sugar Bares, somehow damaging all parts of his skeleton, save for his skull, and was replaced by provisional temporary band member Jake Thorne.

In 1987, the Midnight Riders were asked to participate in a children's charity album with their rock peers, but refused.

In 1989, the Riders' first ever love ballad, "This Man Loves You", written and performed on piano by provisional temporary band member Jake Thorne (who actually wrote it to his father when he died) was released as a B-side to the single "Midnight Ride" from the album Born Yesterday; it became the band's first ever number one hit song. To this day, the band refuses to play the song live.

In 1993, the Midnight Riders finally got their long-overdue recognition from the music industry, winning the Grammy for Most Pyrotechnics in a Single Concert. Dusty explains in a Guitar God magazine article that the reason the Midnight Riders did not participate in the 1987 children's charity album was that giving children charity just makes them weak.

In 1998, the Midnight Riders grudgingly agreed to participate in a Christmas album in exchange of not doing 30,000 hours of community service, and the number "All I Want for Christmas (is to Kick Your Ass)" was written, recorded and mailed in less than an hour.

The Midnight Riders are currently on the road for their No Salvation fairgrounds tour, as part of promoting the just-released Greatest Hits album, High Heels and Brushed Steel. In Waynesboro, Oklahoma, Dusty stabbed a journalist between the ribs, when he was asked why he loves cancer, but the journalist was able to recover, due to the fact that a Midnight Riders' website contest winner, Dwayne Thompson, donated his lung to him in exchange for a full Midnight Riders autographed discography. In Baton Rouge, Louisiana, the Midnight Riders replaced Jake with Riggs Donner's son, Thad Donner, to mark the 24th anniversary of Riggs Donner's death.

The latest action by the Midnight Riders as a band was to decide not to cancel their concert at Whispering Oaks, despite the Green Flu, but when Whispering Oaks was overrun, they were forced to evacuate.

According to their website, Midnight Riders have released over 23 albums. Only four albums and a single have been revealed so far, and only four of the songs have been released. 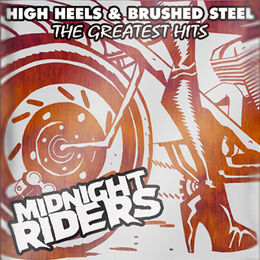 The following songs can be found in-game either on jukeboxes, the "The Concert" finale of "Dark Carnival", or the radio at the wedding gazebo in "The Riverbank" in "The Passing".