Edit
watch 01:54
Arcane: League of Legends - The Loop
Do you like this video?
Play Sound

"Man, they really trashed this airport."
―Louis
"I wonder if this is more lost luggage than normal?"
―Zoey

Metro International Airport is a 2-story (6.6 m) airport located in the city of Newburg. The address of this airport is 1000 Airport Way (As it was seen on the CEDA posters in Blood Harvest). It is the main objective of the Survivors in the Dead Air campaign in Left 4 Dead.

Before the Infection, the airport was one of the many ways out of Newburg. Though the airport is relatively small and can only handle a hand full of airplanes and flights, it helps provide access to the outside world and allows for Newburg businesses to thrive and expand. There are 2 major airline companies that operated at Metro International Airport: Vector Airlines and Pangea Air.

Metro International Airport is a bomb-shattered ruin overrun with Infected. Although it's core infrastructure is destroyed, it's main runway system remains intact and can still accept flights from STOL aircraft such as the C-130 Hercules.

As the Infection started to spread throughout the Newburg city region, Metro International Airport was designated a key point by CEDA as both an evacuation center and as a supply hub for Infection control resources. Within a short space of time, all of these plans were overtaken by the events and the sheer scale of the Infection crisis. CEDA was forced to place the airport under quarantine and re-designate it as a supply center only, but this format was quickly swept away when the quarantine measures failed and the facility became overrun with Infected from the ground while from the skies above, the Infected commercial aircrafts desperately diverted to Metro International in the futile hopes of making safe landings and finding sanctuary.

As the events picked the pace up, CEDA was relieved of it's responsibilities and authority was passed to the military who decided that Metro International served no further useful purpose and in default of any better plan, it should be bombed to destruction in the hopes of killing multiple Infected off and limiting the spread of disease.

The military's obsession with "using a bigger hammer" and resorting to aerial bombing is first encountered at Metro International, but reaches it's full flowering in Left 4 Dead 2 (Refer to The Parish campaign). This was a classic example of the "Scorched Earth" policy and is symbolic of authority that has no better strategy other than to deny the invaders key resources and demonstrate that it is "doing something" while buying time until something more effective is formulated.

Note that for public relations purposes, the military could claim that bombing Metro International was a way to prevent the individuals who may be infected or Carriers from attempting to escape by commandeering the aircraft and enhancing the risks of spreading the Infection. In this regard, it is possible that the Survivors' C-130 was lost because it was picked up on radar as having departed from Metro International and subsequently intercepted and shot down by the military. If true, this lends further credence to the Survivors' increasingly jaundiced view of the military authorities.

Ad for Metro International Airport, note that the word "vacation" is misspelled as "vaction"

Logo for Vector Airlines; one of 4 airlines operating at Metro International Airport 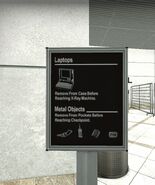 Seen in Blood Harvest, CEDA initially set up an evacuation center at the airport; however, it was later placed under quarantine

The entrance to the airport as seen by the Survivors