Edit
watch 02:46
The Quarry - The Loop
Do you like this video?
Play Sound

"I am in love with this gun!"
―Rochelle

"This right here'll mess some shit up"
―Coach

The Magnum is the most powerful ranged secondary weapon in Left 4 Dead 2. It has only an eight-round magazine and cannot be dual-wielded, but delivers one-hit kills to Common Infected on all game modes and all difficulties.

The Magnum is less commonly spawned than an extra Pistol and is typically found where that extra Pistol would normally be. Unlike the common Pistol, the Magnum's accuracy and rate of fire is the same regardless of whether it is fired standing or incapacitated, but still suffers from slower reloading time. The Magnum's damage fall off is it loses 25% damage per 500 Hammer units and has a max range of 3500 Hammer units.

The Magnum Pistol is used by Bill, Louis, Nick, and Rochelle (as well as Zoey in the Xbox 360 version of Left 4 Dead 2).

An alternative to a melee weapon or pistol, the Magnum holds eight massive half-inch rounds guaranteed to leave a hole the size of a dinner plate. When incapacitated, this powerful handgun will put down any swarming common infected with a single shot.[1]

The Magnum is usually located in a number of places where it replaces the P220 Pistol spawn. A few of the many locations where a Magnum would spawn are:

The Magnum was originally supposed to be called the "Desert Cobra". A string calling the Magnum the Desert Cobra is in "left4dead2_english.txt" under a line about the Magnum. The name Desert Cobra only appears in the finished game on the sign next to the Magnum in Whitaker's Gun Shop, which calls the weapon ".50 Desert Cobra". This is a reference to the pistol's real name, Desert Eagle. 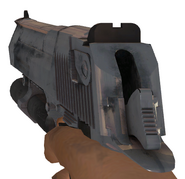 The standard P220 Pistol (left) next to the Magnum.

The text on the Magnum's side.

"Operative" variant found in the locker of Lighthouse Finale.

"Bluewood" variant found in the locker of Lighthouse Finale.