"One distinguishing characteristic about Louis is that he represents the 'every day' man."
―Moby Francke, Valve.
"Well, it can only get better, right?"
―Louis 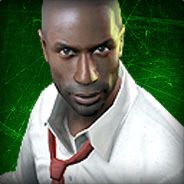 Louis, about to be attacked by a Hunter in the intro.
Add a photo to this gallery

Retrieved from "https://left4dead.fandom.com/wiki/Louis?oldid=158250"
Community content is available under CC-BY-SA unless otherwise noted.