"One distinguishing characteristic about Louis is that he represents the 'every day' man."
―Moby Francke, Valve.
"Pills here!"
―Louis' most memorable voice line 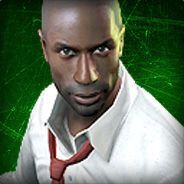 Louis, about to be attacked by a Hunter in the intro.