Edit
watch 02:17
New Pokemon Games - The Loop
Do you like this video?
Play Sound

Liberty Mall is the setting for the last two levels of the Dead Center campaign in Left 4 Dead 2.

The second chapter features the mall entrance, the third chapter is set inside the mall and the finale features a scavenger hunt for gas cans around a stock car in the atrium.

Liberty Mall is a 1980s-style "big box" mall located in Savannah. Its retail mix features all of the usual array of large anchor stores (e.g. Kappel's department store chain), a food court interspersed with smaller retail outlets (e.g. toy stores and jewelers) and service providers (e.g. hairdressers). The mall appears to be a small neighborhood mall as it has three floors containing approximately 84 retail stores in total (About 28 stores per floor).

On this basis, the local residents and shoppers within a 20-minute drive of the mall would be its designed catchment area. Apart from its main entrance to the atrium, there are numerous side doors, emergency exits and service corridors that allowed access to virtually any part of the building.

However, since it was closed for renovation just prior to the Green Flu Infection and was subsequently taken over by CEDA as an evacuation center, many areas inside the mall are inaccessible on account of construction barriers and security fences.

Just before the outbreak of the Green Flu virus, Liberty Mall's management company closed it to undertake extensive renovation and remodeling that was presumably designed to enhance its fading market appeal and overcome some of the competitive limitations imposed by its old-fashioned architecture and design. Retail tenants responded by either closing their businesses or holding store-wide blowout sales and stock clearances.

The mall's makeover was scheduled to be completed by Fall 2009, an event that was planned to be celebrated by a series of Grand Reopening launch activities including the live appearance of a local hero and stock car ace, Jimmy Gibbs Jr.

However, the Green Flu virus put an end to all of this. The mall's construction went on hold and CEDA commandeered Liberty Mall as an evacuation center. Unfortunately, in common with all of the other plans, this proved to be short-lived and futile as Liberty Mall was easily and rapidly overrun by the infected. 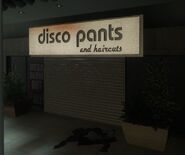 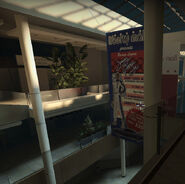 This zombie knows he's styling after a trip to Clipps Classic Cuts.