Left 4 Dead 2 (abbreviated L4D2) is a single-player and multiplayer cooperative survival horror first person shooter game developed by Valve Corporation. It is the sequel to Left 4 Dead, and was built using Source engine. It was first announced on June 1, 2009 by Valve Corporation at Microsoft's E3 2009 press conference. The game is available on PC and Xbox 360.

The Left 4 Dead 2 multiplayer demo was released on October 28 for those who pre-ordered. It was made available to the public on November 3. [1][2]

The story take place in Savannah, Georgia, after the event in The Sacrifice. The four survivors climb up the roof to witness the last rescue helicopter leaves the rooftop of The Vannah. They decide to go to a mall, where a second evacuation point is located. While on their way, they learn each other name: Ellis, Coach, Rochelle and Nick. After an encounter with Whitaker, the survivors enter the mall to discovered that it is overrun, with all CEDA agents at the center are either dead or infected as well. The group enters the mall's atrium to discover Jimmy Gibbs Jr.'s stock car and, with Ellis's plan, fuel up the car to break out of the mall, where they head to New Orleans, rumored to be the last standing city in America.

The four then arrive at the raised bridge in Rayford, where they meet Francis, Louis and Zoey. Bill sacrifices his life to raise the bridge, while Louis is wounded by a Witch as the group explores Rayford. Because the new survivors need to cross the bridge, they must find another way across and refill the generator. After battling through a wedding, the streets and a "historical sewer", they meet up with the original survivors again, who help covering the new survivors while they fending of the Infected to fill the generator and lower the bridge.

They continue to drive until they reach Griffin County, where they find the highway is completely blocked by abandoned vehicles, forcing them to proceed on foot through the abandoned through miles of abandoned car, which they found a search light is still on far away. The lights are revealed to come from Whispering Oaks Amusement Park. As they fight their way through and navigate to the stadium, Coach comes up with an idea to use the concert equipment in The Peach Pit, abandoned by Midnight Riders, to attract the helicopter pilot's attention. The plan worked, and the Survivors manage to evacuate in the helicopter as the masses of Infected swarm the stadium.

After being rescued, the helicopter pilot becomes infected, prompting Nick to shoot him and cause the helicopter to crash. The Survivors exit the wrecked helicopter to find that they have landed in a bayou. They discover a small village, where the villagers decided to fend off for themselves, but ultimately failed as they were overrun. Work their way through the swamp, the survivors come across a crashed plane, dead military paratroopers, and infected swamp villagers. The previous survivors had informed any passerby to head to the Plantation House. When the survivors head there, they found a radio, which they contact Virgil for rescue. After fending off the horde, Virgil blasts the gate open to allow the survivors to escape on his boat before they could overwhelm them.

On their to New Orleans, Virgil's boat runs low on fuel and drop the survivors at Ducatel, Mississippi to find gas. The survivors forgot the gun bag, and the local gas station ran out of gas, forced them to go to the next gas station two miles away. Passing through an abandoned sugar mill infested with Witches, they found the gas station. After collecting their fuel, they begin to head back where a stormy weather hit. Going all the way back to the Burger Tank, Coach comes up with the idea to use the Burger Tank's sign to signal Virgil, which they success to do so as Virgil arrives to pick them up before the Survivors are overwhelmed by the Infected.

Virgil drop the group on New Orleans, where Coach is immediately reinvigorated as they see fighter jets in the sky, knowing that the military had not abandoned the city yet, though Nick was skeptical about their presence. They decide that the bridge in the distance is the best chance of survival and discover the corpses of non-infected people on the way. The survivors suspect that the military took over CEDA's pitiful attempts to contain the situation as they find themselves in an area being bombed by the military, and quicken their pace to the bridge. They interrupt a transmission on the bridge between the two military personnel: Papa Gator and Rescue 7, which the two suspect that the Survivors are Carriers. Rescue 7 are prepared to carry the carriers, as papa Gator informs the Survivors that they are lucky as they had just pulled out of the area, and that they must reach to the other side of the bridge for rescue. The Survivors fight through the Infected amassed on the bridge and reach Rescue 7, which as he carry the survivor out, the fighter jets bomb the bridge to prevent the Infected from leaving the city and the pilot takes them out to a military cruise ship at sea. [3]

The Cover and Rating[]

The cover of the Left 4 Dead 2 is almost identical to the original Left 4 Dead cover. The hand was modeled once again by a hand model named Andrea Wicklund.

The idea was to create a hand missing another two fingers along with the famous original missing thumb, resulting in a hand only holding up two fingers, further signifying the number two. The background's color was also changed to a lighter shade of green.

Around June 2009, the ESRB told Valve that the new cover is unacceptable and the idea was changed to tucking the two unwanted fingers behind the hand to attain the desired effect, yet still keep the missing thumb.

Around July 2009, Valve decided to change the cover once again, making the two tucked-away fingers slightly more visible. The hand drastically changed as the background did which is now yellow.

In the United Kingdom, the cover was changed to show the hand facing the opposite direction as the two-finger sign towards the viewer is considered an insult. This cover design change does not apply with the New Zealand and Australian versions of the game even though the direction of the two-finger sign applies in those countries as well. In addition, the German and Japanese version of the cover features all of the fingers intact as it did with the first game due to the same censorship reasons that applied to the first game's cover.

Australia and Germany censored Left 4 Dead 2, removing some features generally to do with violence: 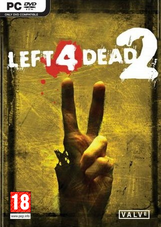 The cover for the UK version of the game. 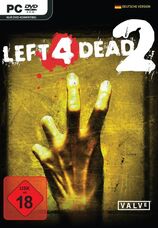 The cover for the German version. 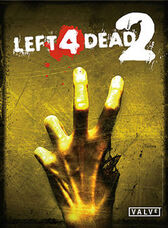 The latest cover art for Left For Dead 2

These are the default controls of Left 4 Dead 2 for both the PC and Xbox 360 versions.

Refer to health for further tips. Make sure that your teammates know how to revive you and give first aid kits and/or pain pills to you. The Survivors need to watch out for each other.

"Ever wonder how far you could make it through the zombie apocalypse with just a chainsaw and a grenade launcher? Left 4 Dead 2 has your answer. Everything about Valve's sequel to last year's intense co-op FPS is amplified, with gratuitous gore, tons of melee weapons, intensified finales and even more zombies. If you still think that this sequel came too soon, then you haven't cracked a clown zombie in the face with a cricket bat while protecting a lawn gnome."

The Drunk Tank Podcast by RoosterTeeth named Left 4 Dead 2 the best game of 2009.

Shortly after Valve's announcement of Left 4 Dead 2, many fans were shocked of the idea due to the short period of time after the first Left 4 Dead and the fact that the long promised SDK (which is essential to making new levels for Left 4 Dead) was being held back because of this. Hours after the announcement fans gathered together and formed a group called L4D2 Boycott (NO-L4D2), the group reached 10,000 members in one week and 35,000 members in three weeks. The group believed that Left 4 Dead 2 should not be a separate game in order to keep the community one, claiming that releasing a sequel would split the community. Their suggestion was to make Left 4 Dead 2 either an expansion pack that is not full-priced or free downloadable content, citing a lack of new content and also voicing their preference to keep the original Survivors and maps. Many fans were also disappointed that Valve had yet to deliver the free DLC that they promised.

Valve informed the fans that they have been tracking their comments ever since the first announcement on June 1, 2009 and their response was that Left 4 Dead will continue to be supported with downloadable content. This announcement caused some fans to believe that Valve saw the fans of Left 4 Dead as boycotting the sequel only to get more free updates and save money. Valve also said that they are discussing the matter and are considering importing the original maps into Left 4 Dead 2; nothing regarding the original Survivors was mentioned.

The boycott has since been officially disbanded as the founders themselves said that they have done what they set out to do and are now sympathetic with Valve's work on Left 4 Dead 2, but however still maintain that they themselves will not buy the game. Despite stating this, one should note the irony that on the leader's profiles it is noted that they both own and play Left 4 Dead 2.[7][8]

As of 2011, Valve has ported all six original campaigns from Left 4 Dead to Left 4 Dead 2, playable with the original survivors. No Mercy and The Sacrifice were ported to the game on October 5, 2010, while the rest were ported with the addition of Cold Stream on March 22, 2011. The campaigns are virtually identical to their original versions besides the addition of melee weapons (which were absent from the original game) and updated character icons. 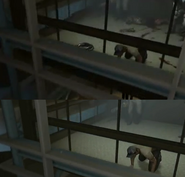 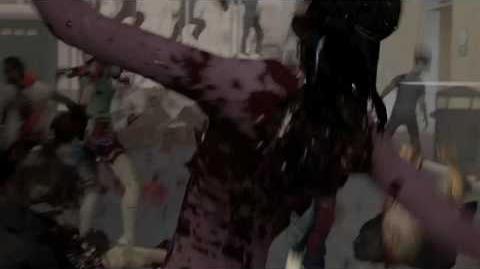 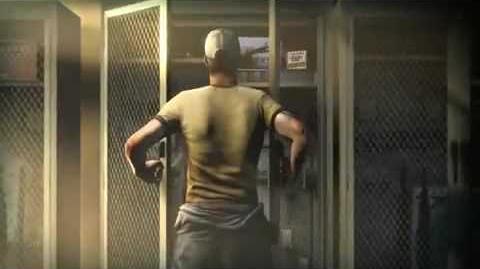 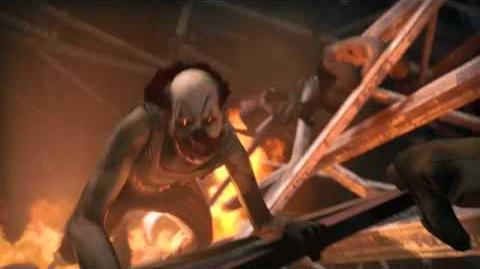 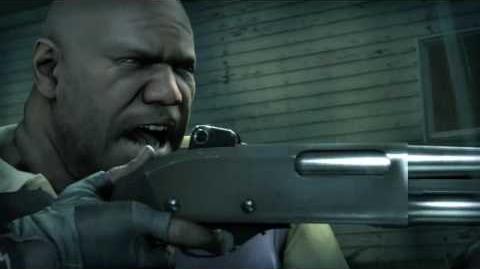 The Left 4 Dead 2 Survivors as they appear on the E3 09 trailer.

The Charger, a new Special Infected. 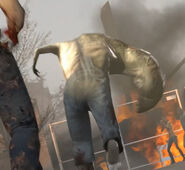 A shot from behind the Charger.

Coach and Ellis on The Bridge (early screenshot).

Coach and Rochelle on the magazine cover of PC Gamer August 2009.

The Beta main menu of Left 4 Dead 2, not fully revealed.

Major changes from the original[]