View source
watch 02:52
Roblox: DeepWoken - The Loop
Do you like this video?
Play Sound 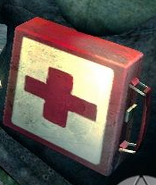 Target Ibuprofen, off of which the Pain Pills are based.

Player's HUD while having healing items. Ellis is under temporary health effect gained by using Pain Pills or Adrenaline.