"Folks call me Ellis. I run an auto shop with a couple of my buddies. We're also in a band. I play bass."
―Ellis, introducing himself
"Kill all sons of bitches. That's my official instructions."
―Ellis
"He's like a five year old. With guns. And a comprehensive grasp of every swear word in the English language."
―Nick

Ellis (also known as El) is one of the four playable Survivors in Left 4 Dead 2. He is the youngest of the group.

A junior mechanic by trade in the city of Savannah, he presents himself as a goofy, beer-loving country guy with an unsophisticated and sometimes naive world view.

According to Chet, from Valve, he is "extremely excited" about everything, like managing to visit a concert and being able to kill a lot of zombies, occasionally doing both at the same time, like in the Dark Carnival finale.

Personality-wise, Ellis is open, friendly, inclusive and extremely optimistic, similar to Louis from the first game. In common with most young men, he is a risk taker and believes himself to be invincible.

He is also easily distracted, often breaking into rants about things that have nothing to do with the current situation: far-fetched stories about his friend Keith and indulging in a flight of fantasy about marrying Zoey and taking her off on a cross-country road trip - all at the most inconvenient of times.

Ellis' facial features are based on Jesy McKinney and he is voiced by Eric Ladin. 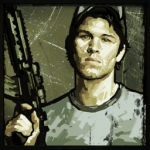 Ellis' irrepressible optimism leads to some mixed relationships with the other team members, who cannot figure out whether Ellis is genuinely oblivious to the danger they face or has a highly resilient, strong-willed personality which he chooses to mask behind a lighthearted surface persona.

Whatever is supposed to be the truth, Ellis presents to his fellow team members the view that the Zombie Apocalypse is a thrill-laden adventure while his open and friendly nature allows him to form affectionate bonds with his teammates effortlessly. Ellis is quick to claim everyone as his friends, as he will sometimes say, "This is what friends are for," when using a med-kit, or will tell a fallen teammate, "I ain't leavin' you!" and he mourns the most when any member of the group dies. In overall terms, Ellis can be viewed as the group's little brother.

Although his apparent obliviousness to the gravity of the situation implies that he is rather naive or even unintelligent, this view is incorrect: he is not stupid, as he proves many times over in combat and most notably when he comes up with the plan of using Jimmy Gibbs Junior's car to escape the mall.

Coach and Ellis, both being natives of Georgia, get along well together and have a shared useful understanding of local culture and geography, which enables them to navigate Savannah and to make life-saving connections to Jimmy Gibbs Junior, the Midnight Riders, and the Whispering Oaks Amusement Park. However, being true to his profession, Coach is inclined to treat Ellis as an immature rookie team member on many occasions.[2] While he seems to care about the kid, he is not above making at least one condescending judgment about Ellis not being right in the head or telling the original Survivors (in The Passing) that Ellis can be left behind to make room for them—though Coach is probably joking.

Nick generally patronizes Ellis and makes fun of him on several occasions, most particularly in the early campaigns, when Nick does not as yet have much respect for Ellis' fighting ability. For example, when the player looks at Ellis when playing as Nick and uses the vocalize button, sometimes Nick will say Ellis' name in a mocking southern accent. There is never any outright aggression in Nick's stance and this could be construed as simple alpha-male banter designed to put Ellis in his place in the pecking order. In return, Ellis never takes offense and even seems to look up to Nick a bit, starting conversations with him such as having the same suit or sometimes being excited at Nick shooting the helicopter pilot. Once his position in the group is secure, Nick will begin to compliment Ellis on his shooting or engage him in small talk such asking if the Midnight Riders are any good.[3]

Although it may seem that Nick is less caring toward the younger man, he has a soft spot for Ellis, as well; if Ellis dies, Nick will sometimes apologize for his behavior.[4] Ellis is always sad to see Nick die. The only time Ellis is really angered by Nick occurs in an argument over the relative merits of horses for riding or as food. Ellis also may sometimes call the Spitter Nick's mom or his ex-girlfriend. Overall, Ellis sees Nick as a very good friend, as in The Passing, when he suggests that the two of them get a tattoo with Bros on it or when he responds to Nick's exclamation of "I hate you, Ellis" with "Well I still like you, Nick."

Rochelle is the most forbearing toward Ellis, referring to him as sweetie whenever Ellis trails off into one of his long-winded stories about Keith. Although Rochelle seems to have a more realistic grasp of the situation and often sides with Nick, she never patronizes Ellis and is always patient with him.[5] Much of this can be attributed to the fact that she is some years older than Ellis, better educated, is used to dealing with different classes of people in her professional media career, and has more world experiences. Ellis is unfailingly polite toward Rochelle, referring to her with the outdated Miss honorific throughout the first Dead Center chapter. Rochelle perceives Ellis as a non-threatening, what-you-see-is-what-you-get character, and this explains why Ellis is the only one who is able to make her laugh. Overall, theirs is a big sister–little brother relationship, and this is why Rochelle stands up to Nick when he picks on Ellis' crush on Zoey and tells Ellis that in order to win Zoey's heart, "You just be your sweet self." He does tend to be closer to Rochelle than his fellow teammates.

Ellis seems to like Francis. He refers to him as a cool guy a number of times and believes he is trustworthy. He takes Rochelle's joke about having respect for him lightheartedly. He and Francis will even talk about cars and motorcycles until they are stopped by Zoey. Both of them also believe that if there are zombies, there must also be vampires and mummies. Their only conflict comes over Jimmy Gibbs Jr., who Francis either believes to be a guy or a dog who sold tacos.[6][7] If Nick or Coach mentions that Francis will probably steal Jimmy Gibbs Jr.'s car, Ellis repeats, "I will kill him," and tells the other Survivors that their mission to New Orleans has changed and that Francis is now their target.

Ellis has a huge crush on Zoey. He considers it love at first sight.[8] Coach and Nick tease Ellis about liking Zoey, but Rochelle defends him. Ellis states that he is a nervous wreck when thinking about Zoey and will even tell the others he wants to marry her.[9][10] At the beginning of The Passing when Ellis tries to talk to Zoey, he will sometimes stutter and ask someone else to talk to her because he is so nervous.[11] When leaving, Ellis will show sadness at having to leave Zoey and wishes to see her again.[12] To some extent, Zoey reciprocates this attraction but not to the same degree as Ellis. On their first encounter (when Ellis crumbles into tongue-tied, love-struck embarrassment), she is never anything other than all business. However, at the end of the campaign, Zoey thaws somewhat and may wistfully wonder if she will ever see Ellis again or whether it would have been a better idea to team up with Ellis' group.

Ellis and Louis get along quite well. Sharing their enthusiasm and optimistic attitudes, they are quick to wish each other the best. Louis finds Ellis funny when Francis and Nick begin to argue. Louis also feels Ellis will definitely make it to New Orleans, praising him as he leaves. Both seem to be avid video game fans, as Louis refers to Counter-Strike & Half-Life, and Ellis to Team Fortress 2 in at least one of their lines. 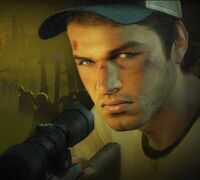 A close up photo of Ellis. 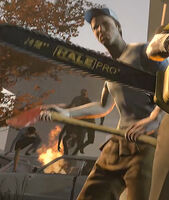 Ellis as he appeared in E3 version of The Parish poster.

Ellis with a Magnum as seen in game. 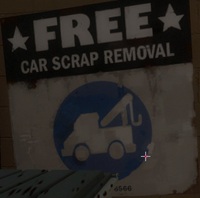 The same car design is on Ellis' cap. 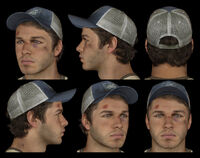 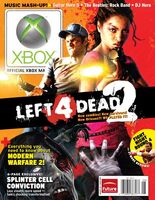 Ellis and Rochelle on the cover of the August 2009 issue of the Official Xbox magazine.

Dwight Fairfield from Dead by Daylight dressed as Ellis.