Edit
watch 02:56
Raise a Floppa - The Loop
Do you like this video?
Play Sound

Crescendo Events are actions that caused a massive onslaught of Common Infected, often called a Horde to find and attack the Survivors. The cause is often a part of the environment that the Survivors must activate in order to progress through a level, generally acting as mini-finales. An important factor during gameplay is that Special Infected (Including the Tanks) are invariably intermingled or interspersed with Common Infected during the Crescendo Events. In Campaigns with five chapters, Crescendo Events don't typically appear until the second chapter and then the rest of the campaign, the only exceptions being The Train Station and Return To Town.

Most Crescendo Events involved causing a loud noise to sound or a bright light to activate which attracts the Infected.

Another type of Crescendo Event is known as a Gauntlet Crescendo Event where rather than wait a Horde out, the Horde is spawning and the Survivors must keep moving in order to survive, usually to turn off whatever is attracting the Horde. These types of events are only found in Left 4 Dead 2. The examples of the Gauntlet Events included the Crescendo Events of The Streets, The Mall, The Fairgrounds and The Coaster among others. 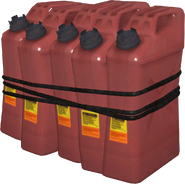 A closeup of the gas.

In Left 4 Dead 2, the strategies for dealing with the Crescendo Events are different as they are more difficult to deal with. A common tactic in Left 4 Dead's Crescendo Events was to sit in a corner and wait it out, making them fairly easy. However, in the sequel, after the Survivors started a Crescendo Event, there will often be a second event to turn the trigger of the Horde off and stop the Hordes of the Infected. Sometimes, it is necessary to flip the second switch to proceed while other times, it is not actually necessary to stop the Horde, but typically preferable. There are also Panic Events that occurred much more frequently than the Crescendo Events. An extreme example of this is the Impound Lot from The Parish's third chapter, The Cemetery.[1]

Unlike Crescendo Events, Panic Events are things that can be avoided as the Survivors proceeded through a level if they are careful. The number of summoned Infected appears to have been tweaked by recent updates.

"You have GOT to be kidding me!"
―Nick, when entering the Impound Lot in the Cemetery.

Cars are strewn about the map in virtually every level. While most are harmless, you'll occasionally find an alarmed one. These can be easily identified with a reflective red glare on the car windows. When shots are fired near an alarmed car, it will send a short "beep" out, warning the trigger-happy players to watch their fire. If an alarmed car is hit or touched by a nearby Survivor, it will set an alarm off and send 2× the horde towards the team making it little difficult.

The car alarms will not go off if a shot lands from long range. In Left 4 Dead 2, Incendiary ammo can also be used as incendiary shots will not trigger car alarms. Car alarms are also not triggered if the bullets are shot through walls ((un)breakable glasses are an exception). Car alarms are rather rare in Left 4 Dead 2 with the exception of The Cemetery where the Survivors have to pass through a parking lot that is literally full of alarmed cars. In Left 4 Dead 2, Ellis and Nick will often warn the survivors when near a alarmed car.

Alarmed cars will generally appear in, with the exception of Death Toll, The Last Stand (L4D version) and Swamp Fever.

In The Terminal level of Dead Air, the Survivors approach the security area. As with any airport's security area, Metro International Airport has metal detectors. Walking through one of them will trigger the noisy alarm and the Panic Event as the Survivors are clearly carrying quite a lot of weaponry and ammunition made of metal, However, they can simply walk around the two functional detectors and avoid the event completely. Pulling the Survivors through metal detectors is a popular tactic for the players that are using the Smoker in Versus.

Stronger than Moustachio and Stache Whacker[]

In The Barns, there are two games in the carnival that can be interacted: Stronger than Moustachio and Stache Whacker. If the player successfully won these games (using an Adrenaline Shot and hitting the High Striker with a melee weapon or getting a score of 42 in Stache Whacker), it will summon a Horde and the player(s) will earn the respective achievements assuming they don't already have achieved it.

Successfully hitting the bell of Stronger than Moustachio without using Adrenaline Shot (by having 100 HP) will not set the horde off as the bell does not break, and neither will it count for the achievement.

Survivors hit by Boomer bile will be blinded and one Horde (In addition to the nearby Infected) will specifically target the biled Survivors. Bile bombs are similar to Boomer bile, except they worked on the Infected instead. Regardless, once the bile wears off, the Infected present in the area will attack the closest Survivor to them.

Throwing a Bile Bomb will also summon a Horde.

After a certain period of time, the Director will send a Horde at the team. The time that it takes for the Director to summon and send a Horde varies by difficulty. The Director can also send a Horde if the team backtracks, though the difficulty still influences how fast that they will spawn. The only exception seems to be Dead Center's third level, The Mall where the Hordes came very quickly regardless of difficulty, but came with fewer Infected to compensate for it.