"I ain't gonna die waitin' on salvation. As long as we still got guns, we gonna fight."
―Coach, in the teaser trailer.
"My friends call me Coach. I guess y'all can do the same."
―introducing himself

Coach (real name unknown) is one of the four playable Survivors in Left 4 Dead 2. He was a high-school health teacher and coordinator for the freshman football team before the Infection hit his hometown of Savannah. He is the oldest of the group and takes it upon himself to motivate his fellow Survivors.

Coach's facial features are based on Darnell Rice and he is voiced by Chad Coleman.

Coach is the eldest, voice of reason, and authority of the Left 4 Dead 2 team, playing a similar role to Bill in Left 4 Dead. He comes across as a warm-hearted father figure with an optimistic attitude that is hard to disagree with. Despite his friendly demeanor, his experience as an actual coach makes him demand things of the other Survivors in a positive way - such as loudly encouraging them to get back on their feet when they are severely hurt and encouraging them to continue rather than give up. Coach can be seen as the father figure if not the official leader of the group. He appears to be a fairly pious man, at times leading prayers and reciting scripture to encourage the group.

Coach also respects both his fellow Survivors, and to a lesser extent, the Infected. This is shown if he is on critically low health, as he may say "They beat my ass fair and square." Like the other survivors, he dislikes CEDA because of their inability to deal with the Infected. This is shown several times throughout the storyline, as during The Swamp he thinks CEDA is not doing their "job" right if they have to be forced to get help from the swamp people, and during The Park when looking at the "Where is CEDA?" graffiti he may say "Good question, where in the hell is CEDA? Cause I'd like to shoot some of their asses." Coach also has an unhealthy obsession with food.

Coach also seems to be the "brains" of the Left 4 Dead 2 Survivors, as during Dark Carnival he convinces the team that if they use the pyrotechnics from the Midnight Riders' concert finale, it would get the helicopter pilot's attention. During Hard Rain, due to the Survivors accidentally leaving the gun bag (which had flares) behind with Virgil, he suggests using the Burger Tank sign to get his attention. 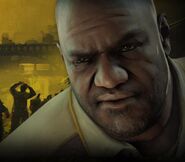 A close up photo of Coach.

Coach in previous version of The Parish poster.

Coach with an Axe as seen in game.

Coach equipped with an M16A2.

Coach on the magazine cover of PC Gamer, August 2009.

Early concept art of Coach with a football helmet and a compound bow.