Campaigns (or movies) are grouped sets of environments used for gameplay in Left 4 Dead and Left 4 Dead 2. Campaigns are aesthetically presented as if they are individual zombie movies, complete with a poster on the loading screen for each one, and usually consist of several chapters (also referred to as "levels" or "maps"). Chapters are typically played in order, following a narrative in which the Survivors travel from a start point in the midst of the zombie apocalypse to an end point where a rescue vehicle to safety awaits, surviving the onslaught of the Infected as they go.  The exact process of experiencing a campaign's content depends on the gameplay mode being played, with some modes utilising single chapters of a campaign for each game rather than progressing from one chapter to the next.

Left 4 Dead initially released with four campaigns, while Left 4 Dead 2 initially released with five campaigns, with both games receiving additional downloadable campaigns after release.  On Steam, downloadable campaigns are added to the games as free updates and are playable simply by purchasing and installing the games.  On Xbox 360, downloadable campaigns must be purchased (excluding The Last Stand, which is available for free) and manually downloaded from the Xbox Live Marketplace. The majority of the official campaigns encompass a larger narrative when played in a particular order, but this is not enforced by the game. The Director-based gameplay of the Left 4 Dead games encourages players to enjoy any campaign multiple times.

On the PC version of the game, custom community-made campaigns are also supported, which may vary in their structure compared to official campaigns (for example, some may simply serve as "map packs" for modes that only use a single chapter of a campaign per game, like Survival). 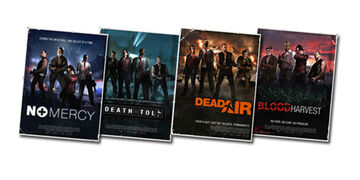 Left 4 Dead currently has six official campaigns playable in Campaign and Versus, with a seventh only available in Survival.

At least one additional campaign was planned and partially developed, but ultimately was cancelled and not officially released as content for the game ― see below in Cut Campaigns.

Having just survived an encounter with the Infected, the Survivors prepare themselves on a rooftop in Fairfield, only to hear a helicopter flying overhead announcing evacuation at the city's Mercy Hospital. Already acquainted with one another, the Survivors proceed to the hospital, and, after fending off the Infected, are picked up by the helicopter's pilot.

Minutes after escaping in the helicopter, the pilot turns into an Infected. After Zoey shoots the newly turned pilot, the helicopter crashes in the outskirts of Riverside, and the Survivors head off in search of a rescue vehicle. Finally, they discover an armored truck in a garage and use it to escape.

The Survivors are once again stranded when they discover that the bridge is destroyed. They abandon the truck and head into the town of Riverside. Along the way they find a crazy guy in a church and then find a boat house at a lake. The Survivors use this to call for rescue from John and Amanda Slater, two people with a nearby boat.

The Survivors are left to die by the Slaters in the city of Newburg, where the team takes shelter in a rooftop greenhouse. A low flying C-130 plane gives them hope that the local airport might still be running evacuations. Upon reaching the airport, the Survivors must defend it while the pilot prepares the plane for flight before escaping.

When the Survivors reach Allegheny National Forest, they decide to head towards a military rescue outpost. Upon reaching a farm house, the Survivors use a radio to request rescue from the military. They then hold off the infected until an armored personnel carrier picks them up and transports them to Millhaven's military base.

The military locks up the Survivors and a doctor explains to them that they are carriers. When Lieutenant Mora sounds the base's alarm to command retreat, the infected attack. Louis saves the lives of soldiers Jeff and Anne, who in return allow them to carry weapons to fight the infected with. Meanwhile, Bill, Zoey, and the doctor head towards the armory as well. They all meet up there and head across the base courtyard, towards an old train. When they get there, Jeff and Anne leave to go with the rest of the soldiers, whereas the Survivors and the doctor head towards the train. However, when they reach it, a Hunter kills the doctor, and the Survivors continue south on the train.

The train comes to a halt in Rayford, Georgia where the tracks end, where the Survivors' new plan is to find a boat and travel somewhere free of the infected. However, on the first boat, Louis finds a dozen Witches on board who nearly rip his leg off. They find another sailboat boat, but when they try to raise the obstructing bridge, one of the generators breaks down and the bridge stops halfway up. The Survivors now face an enormous horde plus 3 Tanks. Seeing that there's only one way this can end, Bill jumps down and fights his way to the generator that stopped and turns it back on, making sure that the bridge raises with the other 3 Survivors on it, but committing the ultimate sacrifice as the Infected eventually kills him. A little while later, the remaining three Survivors encounter four other Survivors who arrive in a racing stock car on the other side. They help them cross the bridge and see them on their way. When the other Survivors have left, Louis, Zoey, and Francis take the sailboat to inhabit islands far away from all of their troubles, and rest out until the apocalypse is over.

Left 4 Dead 2 currently has thirteen campaigns playable in all gameplay modes, six of which are from the original Left 4 Dead and one of which is a non-canon campaign developed with assistance from the fan community ― see below in Downloadable Campaigns.

The Survivors begin their trek on the top of a hotel, watching what was supposed to be their rescue helicopter fly away, leaving them stranded in Savannah, Georgia. They make their way down to ground level via elevator, and introduce themselves on the way down. They then decide to head to a local mall said to be an evacuation station for CEDA. Along the way, they aid a 60-year-old man by delivering bottles of cola in exchange for firearms and a clear path to the evacuation station. Once at the mall, they discover that it was overrun with Infected and the health stations destroyed. With nowhere else to go, they fuel up a racing stock car put up for a show and make their escape.

The Survivors now meet another group of people near a bridge, which needs to be lowered to continue; however, a generator which is on the other side of the bridge must be filled first to activate it. The Survivors then walk by a park and into an apartment complex, which leads them to a wedding gazebo, where they encounter The Bride Witch. After a long walk in the once-busy streets, they are forced to move underground and through the sewers. After reaching the surface, the Survivors once again meet the second group, which tells them to collect gas canisters to fill up the generator, while they are swarmed by the Infected. When full, the bridge was lowered and the Survivors run back to the car and escape once again.

The sun has set and the car is now immobile, the Survivors were forced to travel on foot over the stopped cars. In the distance, they see search lights, so they make their way towards them in hopes that there will be someone around who can help. They discover the source of the lights to be a carnival which they traverse, finding nothing but Survivor-hating Infected. Overhead, a helicopter was heard, so they followed it until they reached the stadium, where they use lighting equipment and loud rock-and-roll music to inform the pilot of their presence. The plan works, and the Survivors were rescued by the pilot. However, this was only true until he began turning pale and attempted an attack.

In self-defense, and perhaps protecting of his comrades, Nick killed the now-infected pilot, sending the helicopter crashing near some boxcars and a shantytown located in the heart of the Mississippi swamps. The Survivors go through an abandoned swamp city, go across a river in a mechanical ferry, head through the swamps and bayou swarming with Infected, and reach the swamp town. Unfortunately, the Survivors find out that the town did not last and was overrun by the Infection. Through the advice of previous Survivors' graffiti, the quartet make their way to a Plantation house, where they were able to contact a boat captain to come and pick them up. They make it out alive, and continue down the Mississippi River, on their way to New Orleans, Louisiana.

Unfortunately, their ship was running low on fuel, and was incapable of reaching New Orleans. The Survivors were dropped off on the coast of a small suburban town named Ducatel with the task to find fuel for the boat engine. Unfortunately, the gas station across the street was out of diesel and a sign told them that the next available gas is two miles away on the other side of a Witch-infested sugar mill. Along the way, the clouds started to roll in and rain starts to fall a little. Once they've gotten the gas needed to fuel their ship, a downpour starts up, and the roads begin to flood, forcing the Survivors to find other paths among the higher ground to make it back to the docks. Left without a method of signaling the success of their mission, they use the lights of a fast food restaurant, called the Burger Tank, to alert their vessel instead. Their plan works, and they were able to make it safely back onto the boat with enough fuel to reach their destination.

After a night's rest on their floating vessel, the Survivors reach New Orleans midday and set off to a supposed military evacuation set up on Veterans Memorial Bridge. After traveling through the city that the Infected took over, they soon become victims of their own saviors as the military began dropping bombs in the city. After ducking and dodging bombs, they reach the bridge, where they are able to contact soldiers via a radio clutched in the hand of a dead man. They were provided clearance to cross the bridge to the evacuation helicopter on the other side of the bay. They finally find themselves flying away from their troubles, and making it out to safety as the bridge they were just on is bombed, and collapses into the bay.

Once each level in a campaign is completed, players are presented with several awards. These awards are purely cosmetic and do not affect gameplay. Only the most relevant will be shown.

These awards can only be found in Left 4 Dead 2. All the Left 4 Dead awards may still be shown based on relevance.

Cold Stream Poster
Add a photo to this gallery
Retrieved from "https://left4dead.fandom.com/wiki/Campaigns?oldid=158624"
Community content is available under CC-BY-SA unless otherwise noted.