"Warning: alarm will sound if door is opened upon clearance from tower."
―Coach
"SAFE ZONE ENDS HERE. This area has been quarantined. Do not enter without a military escort."
―U.S. Military

The Bus Station is a central transport hub station near Bienville Park in New Orleans. The Survivors passed through the park and found themselves at the Bus Station Evacuation Center where they must shut an alarm off to stop the gauntlet panic event to continue on in the chapter, The Park in Left 4 Dead 2.

Serving as a central transport hub station in the middle of New Orleans, many passengers can travel by bus from the downtown area to the suburban areas of the city. Many tourists traveling by bus would be taken here where they can be dropped off and change bus lines. Interstate 10 is seen nearby allowing quick and easy access to the highways for the travelers. The station also has it's own repair garages that are open from 6:00 A.M. to 6:00 P.M. where they would fix, repair or tune the buses up that needed to be fixed or needed maintenance work.

This station was converted into a CEDA evacuation center and served as one of the main evac sites in New Orleans. The people were told to head to this location due to the fact that the buses were used as evacuation transports by CEDA and the large capacity of the people that the bus station and Bienville Park can hold. When the Infection started, the bus services were suspended and CEDA brought a decontamination trailer in order to screen the refugees and put the fences in to form an orderly line.

The process of this evacuation center was that the first people would come through the park into the decontamination trailer, await security clearance from the tower and proceed through the zigzag pattern of the fences and at the checkpoint, give a CEDA representative their medical information, continue on into the bus station and finally board an evacuation transport.

When the Infection was out of control, the military took over this evac site and was trying to separate the Carriers from everyone else to stop the spread of the Infection. With the Infected nearby, the people began a mass panic and started rioting to be let in to the evacuation center. However, the military responded by shooting everyone and they pulled out of that sector. 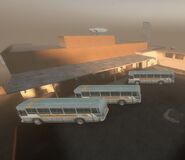 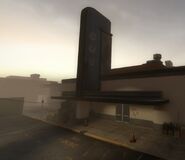 The front of the bus station 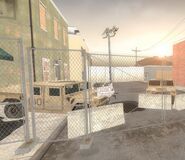 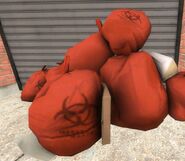 The non-infected survivors (Carriers) shot and killed by the Military