"Find a rural holdout being used by the military to rescue survivors."

Blood Harvest is the fifth and final (on first release, the fourth) campaign in Left 4 Dead. After their rescue aircraft is lost, the Survivors hide out in a forest until learning of a nearby military outpost located at a barricaded farmhouse. They set off through the forest and follow a series of train tracks until entering a military controlled area only to discover the outpost is abandoned. A radio call to the army base at Millhaven triggers the finale and they must hold out until an armored personnel carrier arrives.

The subsequent DLC comic The Sacrifice and campaign of the same name pick up after this point and conclude the entire game. The survivors are betrayed by the military command at Millhaven which is itself out of touch with its own high command. This experience colors their subsequent attitudes and creates a stark contrast to their hopes at the start of Blood Harvest.

Along with the other Left 4 Dead campaigns, Blood Harvest was ported over to Left 4 Dead 2 on August 5th, 2011 after 60,000 players acquired the Connecting Fight achievement for Left 4 Dead 2's Dead Air. As with all the ports, various detail-changes were made to weapons, enemies, pathways, environmental elements and combat sequences.

Below is a complete list of video walkthroughs of the 5 levels:

Please note that the gameplay videos are on each campaign's info page not on each map page.

With the Cold Stream DLC mentioned above, Blood Harvest was edited and ported over to Left 4 Dead 2. Video walkthroughs below show off the Left 4 Dead 2 version of the campaign and all the changes:

Zombies lurk behind every tree, over every hilltop and behind every shadow in this terrifying moonlit search for a rumored evacuation zone to the north: several acres of back-country farmland taken over by the military to get the last of humanity out of Ground Zero. Plunge through pitch-black forests, stumble blindly through fields of swaying corn, and take aim at the silhouettes leaping at you from the darkness—all towards finding a hold-out that might already have been abandoned to the horde.[1]

Safe room graffiti in this campaign is the usual mixed bag of content and literary communication values.

Of note are those inscriptions urging survivors to get to a safe zone by following "the train tracks."

Although not graffiti, the Survivors encounter a number of official signs bluntly instructing members of the general public as to how to behave when approaching a military-controlled facility.

One says: "Keep your hands above your head in the field at all times or you will be shot on sight!" while another says:

Similar signs are also seen when arriving at the Bridge in Left 4 Dead 2.

The map on the farmhouse wall in the radio room is labeled Candy Mountain.

As revealed by a park sign at the starting location, this campaign takes place in and around Allegheny National Forest in Western Pennsylvania, a couple hours' drive from the city of Pittsburgh. The comic The Sacrifice confirms this with a note locating Evacuation Outpost Echo in upstate Pennsylvania. Based on dialog and an opening scene complete with sleeping bags and campfire of burning dollar bills, the Survivors have been hiding out in the forest after their Dead Air C130 escape airplane was lost. A character in voice-over announces the existence of a military safe zone to the north and all they need to do to get there is to follow the train tracks.

Beta versions of Blood Harvest were much greener and brighter than the final version. In addition, there is no fog, making the sky much more visible.

Some chapters of this campaign were also different: 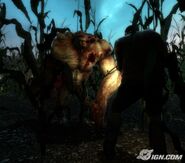 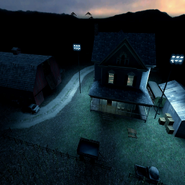