Edit
watch 02:52
Roblox: DeepWoken - The Loop
Do you like this video?
Play Sound

"Puke in the hole!"
―Nick
"Here comes the Bile, you sons of bitches!"
―Ellis

The Bile Bomb (a.k.a. Boomer Bile, Vomit jar or simply puke) is a weapon which appears in Left 4 Dead 2. The weapon was first mentioned in the achievement list. The Bile bomb is a throwable glass jar containing the green Boomer bile. When thrown, it sends the Infected horde to wherever it hits, and potentially causing "friendly-fire" by leading the Horde to attack any Infected coated in the bile. Bile bombs, overall, allow for a brief moment of rest and preparation during a battle.

The Bile bomb can often be found in the first two levels of Dead Center. It may also be dropped by CEDA Worker Infected, though this is less common. The Bile bomb uses the same inventory slot as the Pipe Bomb and the Molotov Cocktail, so only one of the three can be carried at one time.

The bomb spreads Boomer bile on whatever it hits, and the Horde summoned by the Survivors will attack whatever is covered in bile, including other Infected. If the Bile bomb is used on an empty space, it will summon a Horde and all of the local Infected to the place where the bomb landed. Usually, the Director will spawn a Horde if there are not a lot of Infected, and the Common or Uncommon Infected will mostly ignore the Survivors so long as the bile is still in effect and they are not in the way, making them easy targets. The Common Infected hit by the bomb will begin attacking each other, as well.

The bomb can also help in Tank fights as it calls a Horde to attack it. The effect of this is only marginal, however, and usually just serves to slow the Tank down and damage it slightly rather than kill it. Sometimes, though, the Tank will be rendered immobile by the Common Infected hitting it. This can buy the Survivors a lot of valuable time―however, Survivors must be careful, as some of the Common Infected might survive and attack the Survivors, making this tactic especially dangerous on Expert and Realism unless multiple Bile Bombs happen to be lying around such as the Burger Tank restaurant during Hard Rain. If the Tank is AI-controlled and bile is applied to other Infected, the Tank will ignore the Survivors and instead focus on attacking the Infected covered in bile, which can also buy the Survivors some time and cut down on the threat of other Infected attacking with the Tank.

The bomb can also be used to confuse Special Infected as it will make any two of them that have been hit to fight one another as well as the oncoming Common Infected. When a Bile bomb hits any type of Infected, Survivors will be able to see the affected Infected's aura outlined in bright purple. Throwing the Bile bomb on a Survivor will not draw a Horde to attack; however, the Horde will be drawn to the location where the bomb impacted, and will attack any Survivors within that impact area.

Give the infected a taste of their own medicine with this CEDA-developed gastrointestinal projectile. Any zombie you soak with this puke grenade will be swarmed by common infected.[1] 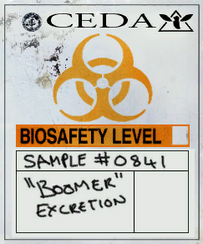 Label found in the Bile bomb 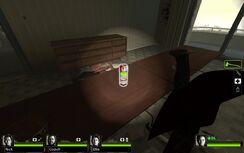 The Bile Bomb on a desk 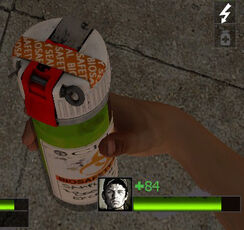 An infected's view when covered in bile