"Does anybody know which way we should go?"
―The Survivors chattering about escaping the forest

Alpine Creek is the first chapter in the customized Cold Stream campaign which was subsequently released in beta format as a DLC offering in March 2011.

The chapter opens with a reversed cutscene showing players the route to be followed. The Survivors spawn in the bed of a fast-moving stream or creek flowing through a wooded area. In single player, you will start equipped with a single Pistol, two Bots will have submachine guns and the third will also have a single Pistol. Health and a melee weapon (usually an Axe) are available under the water next to the starting point (note that you will not have the usual option of picking up a pump shotgun or submachine gun at this stage). If playing as Nick, Ellis will make a general statement to the group that he learned to use a gun before he learned to walk, and if a human player takes Nick's character, Ellis will follow this up with a jibe about Nick's suit.

Once ready, head down the bed of the stream. You will almost immediately encounter larger-than-normal infestations of Common Infected and Mud Men interspersed with Special Infected. Since the submachine gunners represent the core of the team's firepower it is a good idea to let them take down the heavier opposition. Once the first enemies are encountered Rochelle and Nick will begin to recycle on a repetitive basis the lines they used in Swamp Fever concerning mud and Mud People.

After a short distance the creek bed opens out. Climb the left bank and proceed forward until you see a forestry lookout tower. A horde will spawn at this point. Climbing the tower and entering the lookout will reward you with supplies such as Gas Cans. Leaving the tower you will see the supporting posts of the swing bridge seen earlier in the opening cutscene. After cleaning out the Infected milling around below (e.g. with the help of a gas can), cross the bridge to the next area. Off to the left is a small hut which should be searched for supplies and weapons (e.g. a Hunting Rifle). Enter the two-story forestry building featured in the introductory cutscene. This building will usually contain minor supplies (e.g. adrenaline) and an Axe. Climb the stairs and look out of the window to see an area thick with Common Infected and Mud People. They will aggressively respond to the Survivors' presence by swarming forward and climbing up to the window. A Charger is also likely to spawn and do likewise. This combat is relatively easy as all a player has to do is to allow them to approach closely and defend the window as they climb up one behind the other. If the Hunting Rifle was secured earlier, the area can be sniped from the window until it is free of immediate threat.

Once it is safe to do so, drop down from the window (which is a "no return" feature in the chapter) and move across a fallen tree trunk spanning a deep forest pit. Up ahead is a bunker with a sliding door. One player pushes back the bunker door whilst hordes materialize from both the forest outside and the bunker below. Since it takes a few seconds for the bunker door to open, Infected are numerous. Since one player is preoccupied with pushing the door open, this Crescendo can be quite intense. Once the bunker door is open, jump down into the bunker and blast your way through the bunker horde to reach the safe room at the end of the underground tunnel.

Overall, the fighting in this custom chapter is more intense than is the case in a comparable standard Left 4 Dead 2 equivalent; indeed, there are few of the "quiet moments" that are fairly normal in a standard Left 4 Dead 2 chapter. In addition, the team's starting firepower is considerably weaker while the numbers and aggression of the enemies encountered are both noticeably enhanced. 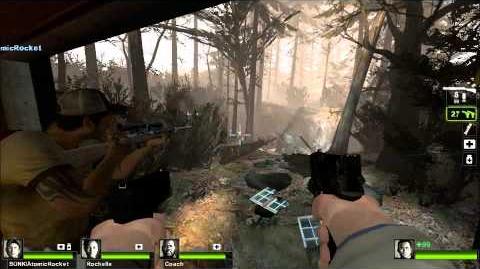 Retrieved from "https://left4dead.fandom.com/wiki/Alpine_Creek?oldid=161018"
Community content is available under CC-BY-SA unless otherwise noted.